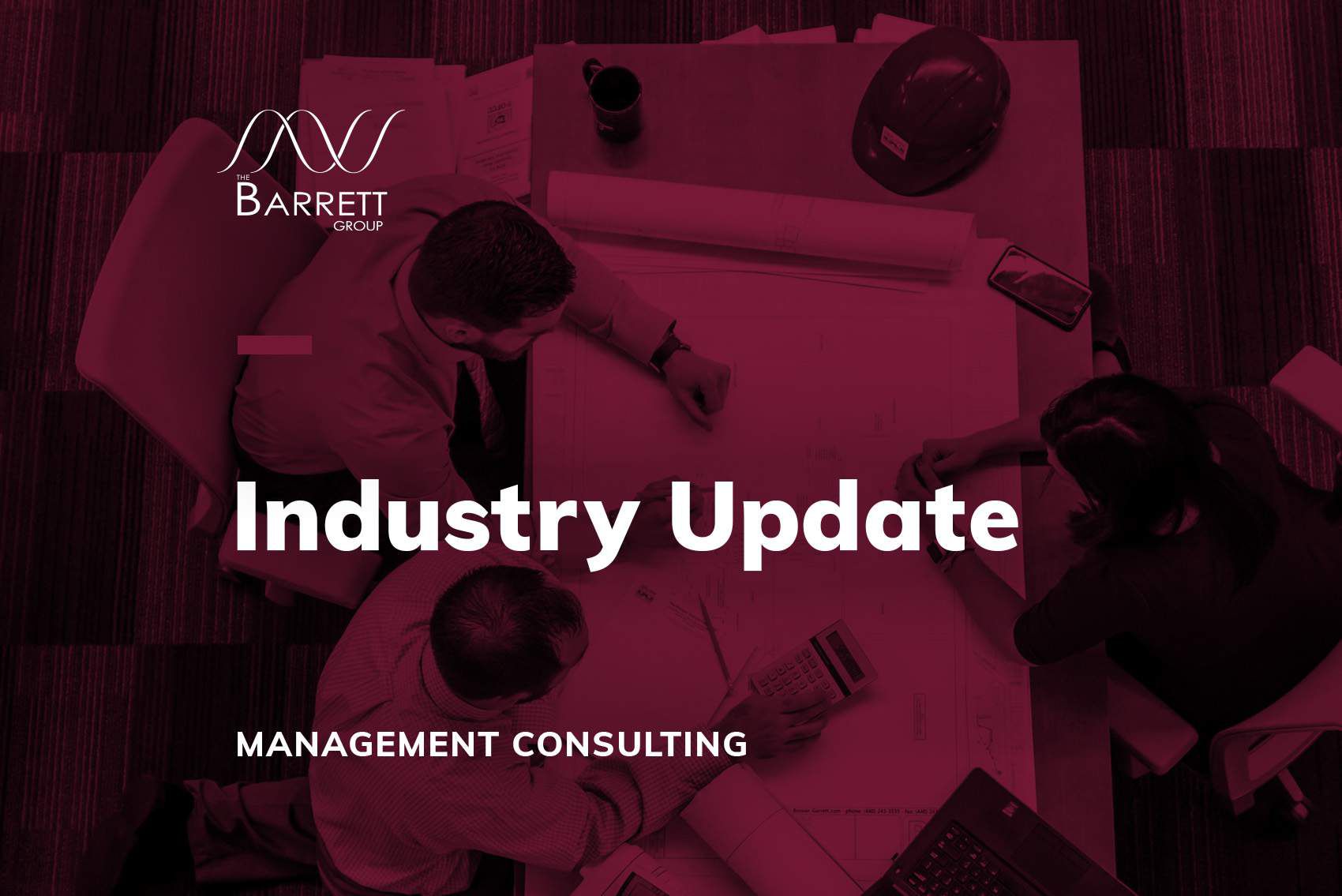 Admittedly, Management Consulting is a rather broad field. So let’s begin with a little definition according to LinkedIn. (The specific geography we are reviewing is US, EU, UK, and the Middle East.) There are 105,600 executives as we define them (see Editor’s Note) in the Management Consulting field. This number has grown by 3% in the last year. And approximately 3,000 industry executives have changed jobs in that period. The industry comprises 73% male executives. That means that this industry, too, exhibits a relatively low share of female managers with some regional variation.

Chart 1 breaks out some of the key specializations in this overall segment. We find that IT, Education, Marketing, Training and Coaching, and Non-Profit. We also include Financial Services and Computer Software. As a group, they constitute about 25% of the executives in the field. The remainder is spread rather widely across other activities. Chart 1 also provides the YOY growth rates as reported through LinkedIn.

Among the top management consulting specializations, LinkedIn highlights these industries as showing a high or very high hiring tendency:

In this Industry Update “executives” will generally refer to the CEO, CFO, COO, CTO, CIO, CMO, and Vice President titles only. Unless otherwise noted, the data in this Update will largely come from LinkedIn. It represents a snapshot of the market as it was at the time of the research. Is LinkedIn truly representative? Here’s a little data: LinkedIn has approximately 722 million users, 174 million in the US and 163 million in Europe. (See Source) It is by far the largest and most robust business database in the world, now in its 18th year. LinkedIn defines the year-over-year change (YOY Change) as the change in the number of professionals divided by the count as of last year. “Attrition” is defined as the departures in the last 12 months divided by the average headcount over the last year.

Executives in these fields are most likely to work in these top 15 locations. These include New York, Washington DC, Los Angeles, London, Paris, and San Francisco. Also Atlanta, Chicago, Miami-Fort Lauderdale, Madrid, Boston, Dallas-Fort Worth, Stockholm, the UAE, and Houston. 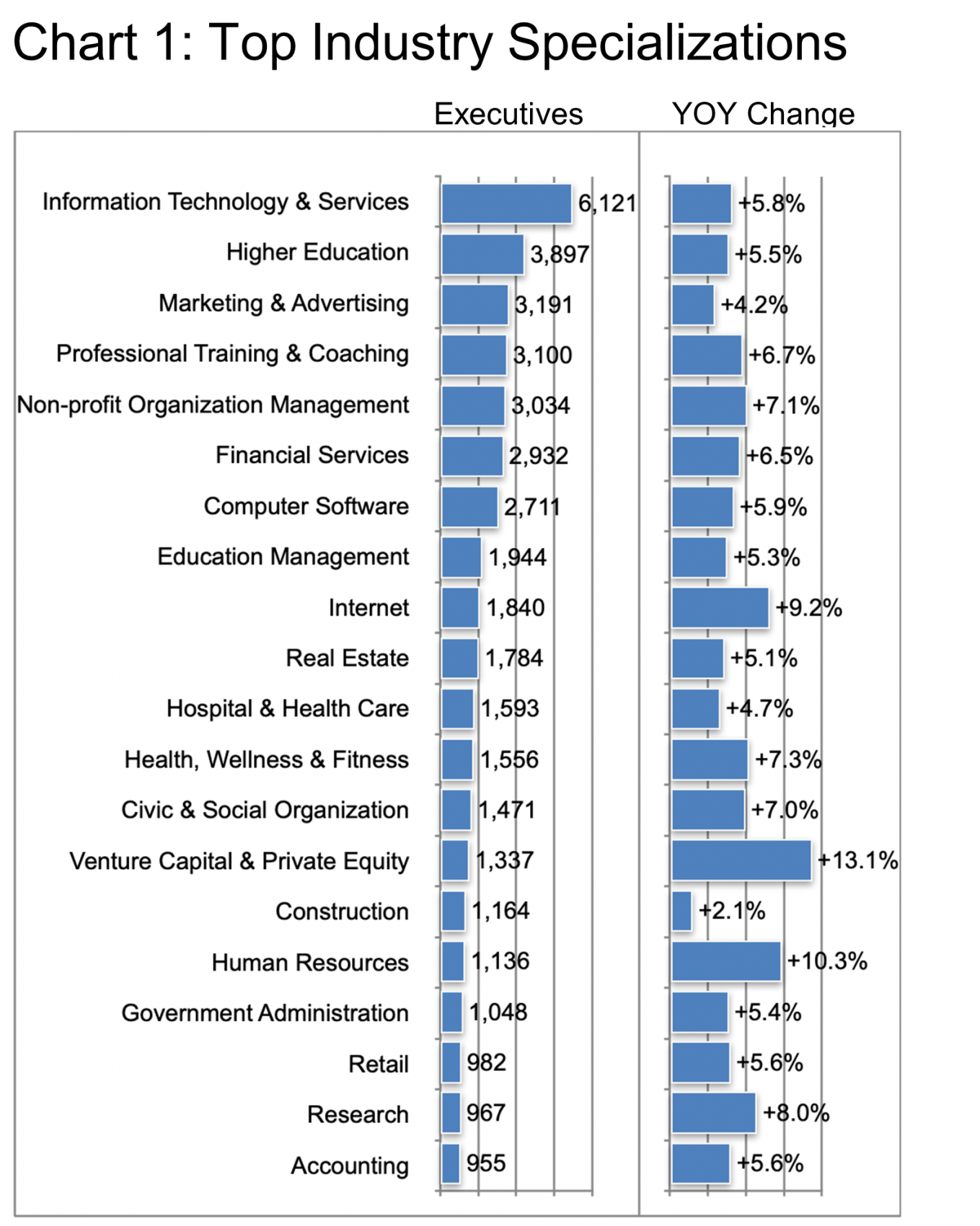 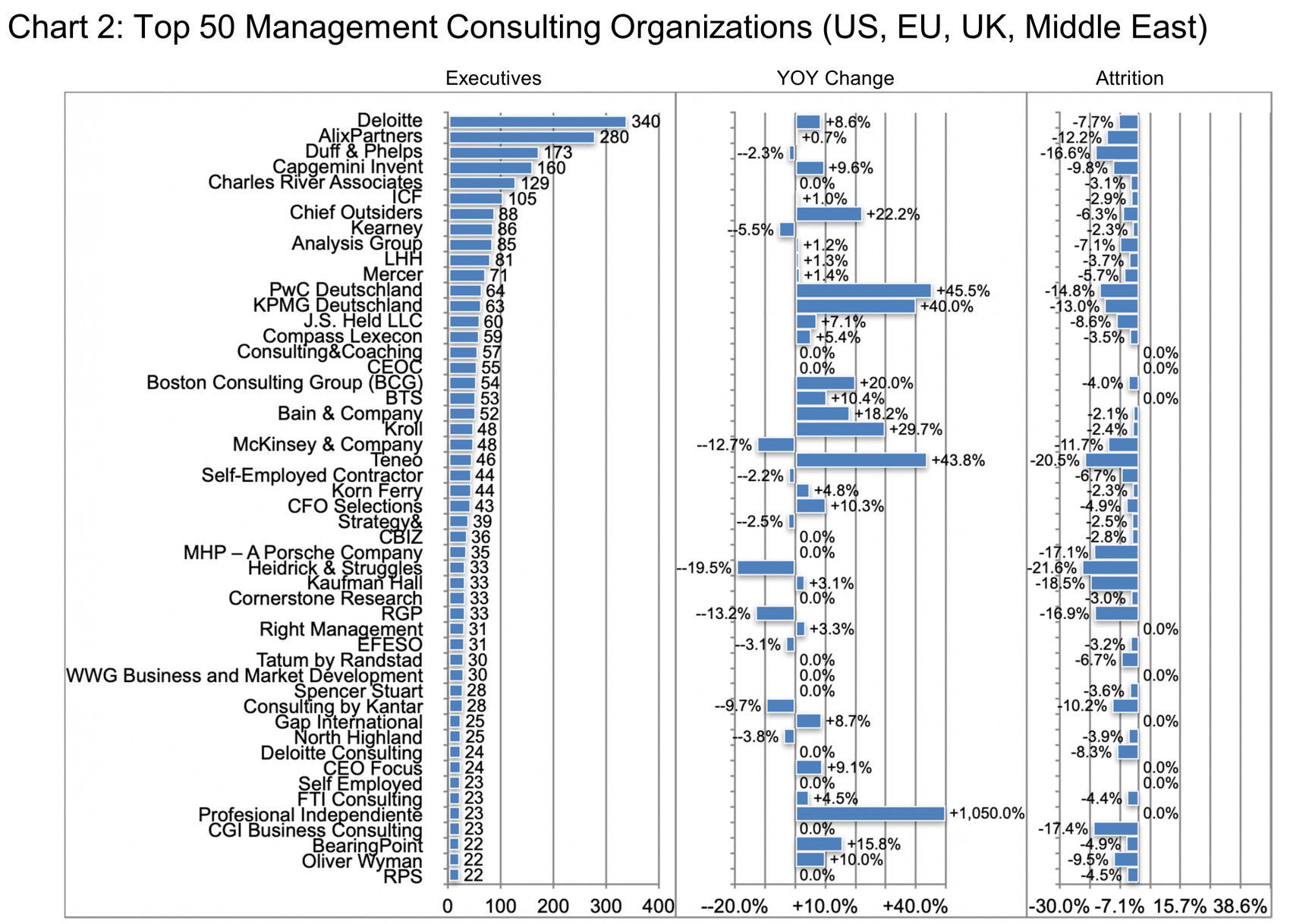 Reviewing Chart 2, it provides an overview of the executives employed in this industry by the employer. No one employer is really dominating the landscape (as we have seen in other industries). The industry is, however, a bit top-heavy. Most of the executives are CEOs (typical of a relatively unconcentrated industrial landscape).

Here is the hierarchy by title:

In this Update we cannot explore all of the ups and downs by company. But we can discuss some of the major changes. Take PwC Deutschland, for example. PwC’s 45.5% headline growth belies a 14.8% attrition rate. LinkedIn lists 25 hires during the latest 12 months, 8 departures, and a net change of 17 executives.

Where did they go?

Where did they come from?

They joined from Deloitte, Cognizant, JRS J. Rettenmaier & Söhne, and SBIT AG. Executives also came from Potiviti Deutschland, Thing-it, and a number of other companies.

If you contrast that with another high-churn company in the list, KPMG Deutschland, you find a similar dynamic. KPMG Deutschland had 28 hires and 7 departures. They experienced a net increase of 21 executives. These executives joined overwhelmingly from direct competitors. These are competitors such as Deloitte, Capgemini, and EY. But they also came from firms offering specific skills such as the Technische Universität Berlin or BIOWEG.

Or let us explore a company with a high attrition rate to see what is going on there. For our example, we will examine Heidrick & Struggles. They experience attrition spiking in January and then picking up pace again during the second half of 2021. This lead to a net seven departures. These executives went to various companies. These included Assembly, Bessemer Venture Partners, PPA Business School, Hedley May, Gryphon Investors, ING and Banff Advisors. Is this an industry segment phenomenon? Probably not. Their direct competitor Korn Ferry had a very different dynamic, with a net five hires in the same period.

The Management Consulting industry splits relatively evenly between the US and the EU/UK cohort. The US has 53,000 executives and the EU and UK cohorts have 47,000. Hiring growth per LinkedIn was higher in the EU and UK (+3.3% vs. +2.2%). But the male dominance also remains similar at 69% in the US and 77% in the EU and UK. At the global level, LinkedIn cites the growth potential for both regions as “low.” It is interesting to note that there are numerous pockets of higher growth both from a subject matter and geography perspective. See Chart 3 (US) and Chart 4 (EU & UK).

Note, we will address the Middle East separately, below. 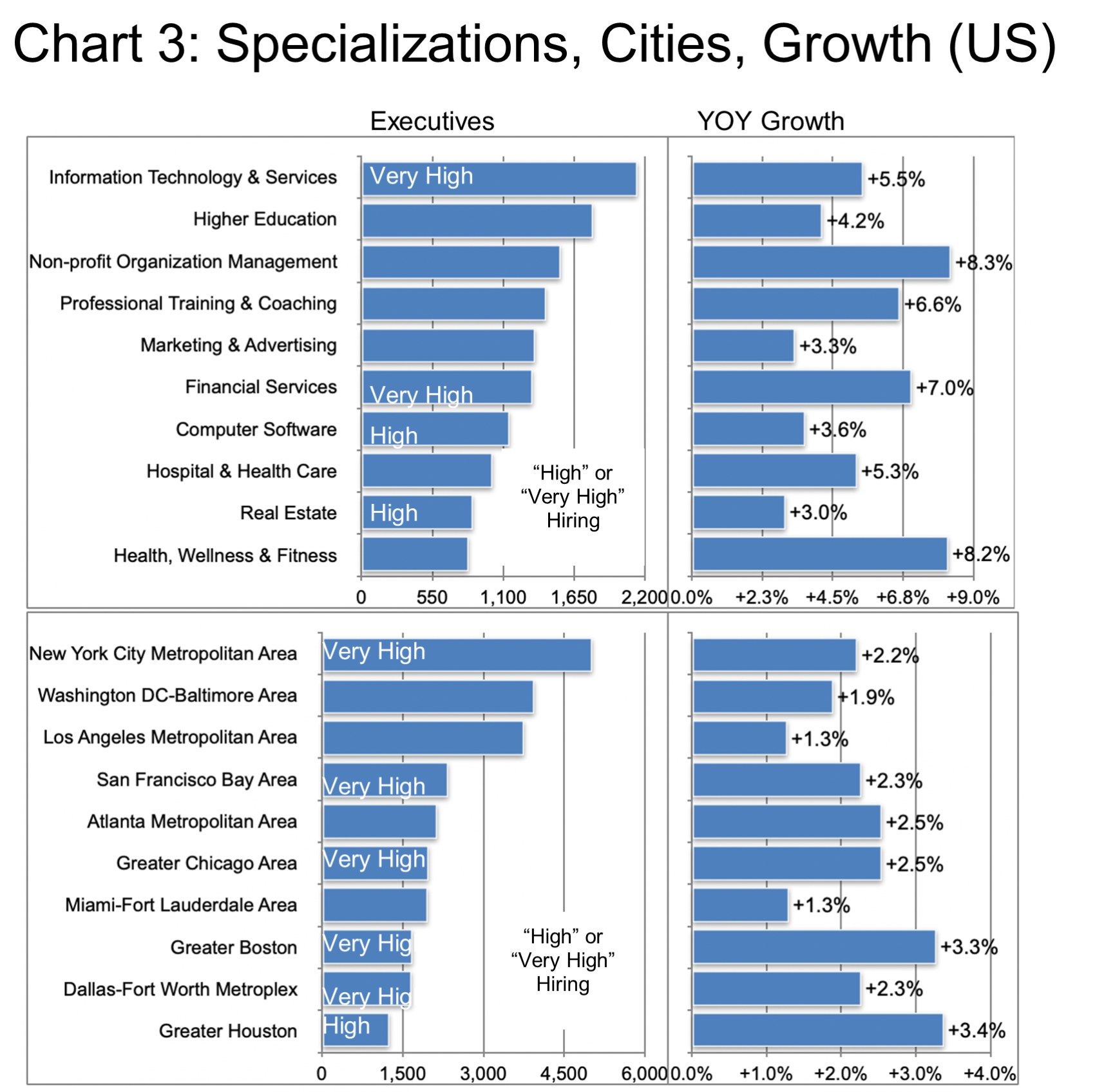 In Chart 3 we examine the largest specializations in this industry in the US in descending order. We see their respective growth rates YOY. We also see LinkedIn’s assessment of where the hiring demand is “high” or “very high.” Non-profit, Health & Fitness, and Financial Services top the bill as far as growth in hiring is concerned. The geographic growth seems quite well distributed at the top of the table. Further down the ranking of cities, however, we do find Albany (+6.4%) Spartansburg (+6%), Albuquerque (+5.2%), Austin (+4%), and other cities demonstrating higher growth.

As far as the EU and UK are concerned (Chart 4), Information Technology is by far the largest specialization. IT has some 3,707 executives. Others are definitely growing faster. For example, Civic & Social Organization, Computer Software, Internet, and Non-profit Organization Management. Further down the ranking, Human Resources, Venture Capital & Private Equity, Staffing & Recruiting. These are followed by Leisure, Travel & Tourism, Environmental Services, E-learning, On-line Media, Transportation/Trucking/Rail, International Affairs, and Wholesale. These all show double-digit growth. It is important to note that this does not necessarily equate to a high or very high hiring demand going forward.

As usual, London and Paris are at the top of the geographic rankings in terms of the number of executives employed in this industry. But the highest YOY growth took place in Munich and Berlin. Still, the hiring demand per LinkedIn remains high or very high in multiple cities as per Chart 4. Additionally, Frankfurt (+8.6%), Gothenburg (+7.2%), Naples (+6.2%), Stuttgart (+5.7%), and Lyon (+5.4%) all come in above the 5% YOY growth mark even if they do not belong among the top cities.

In Charts 5 and 6 we detail the Top Fifty Rankings in the US and EU and UK cohorts respectively.  The charts reflect the broad range of specializations that characterize this industry. It also shows a significant spread in terms of growth and attrition rates. 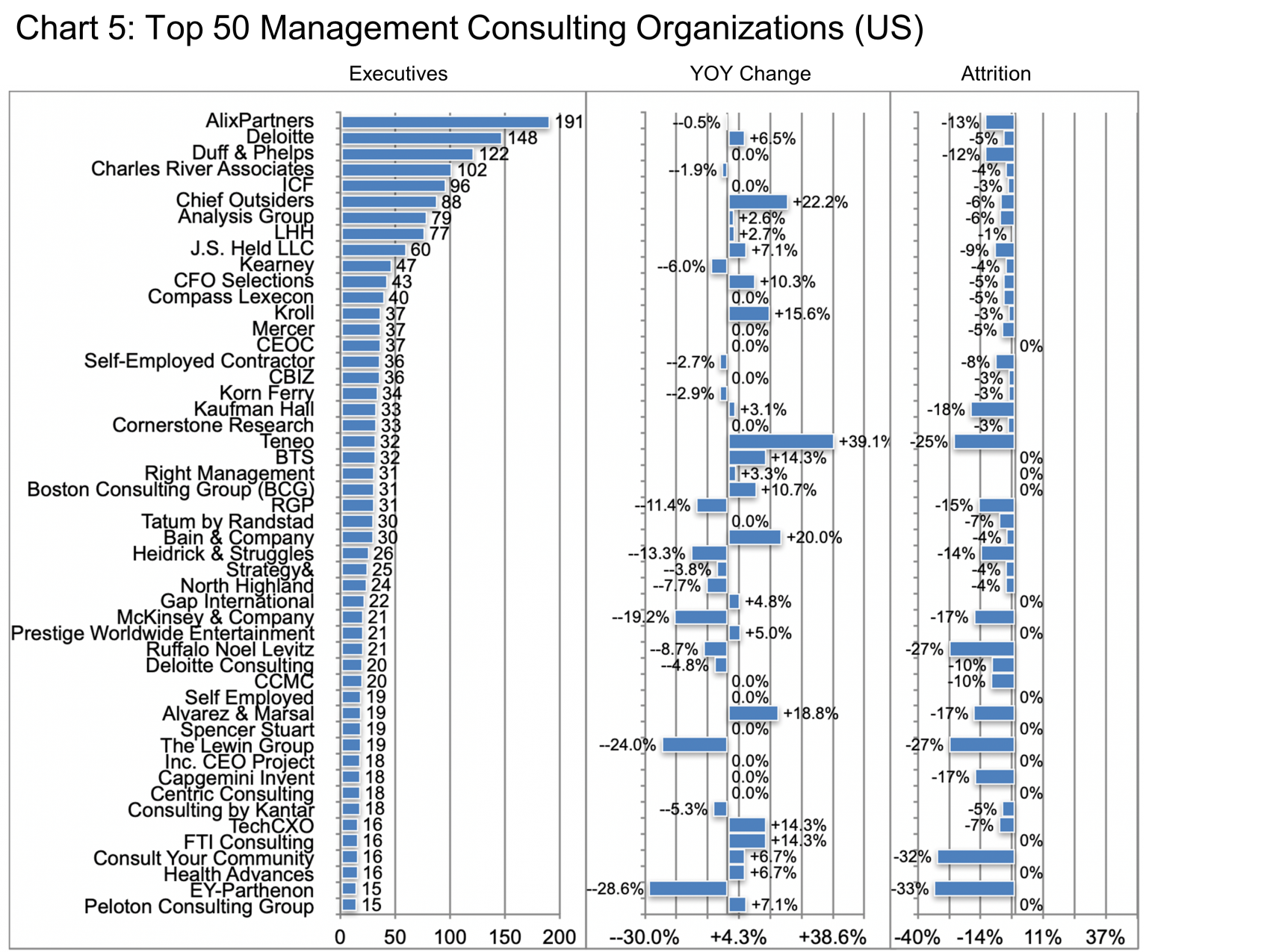 Why separate out the Middle East? For one reason, the employer structure is quite different than the other geographies we have looked at. The field is even less concentrated in this region. As a result, the dynamic of having more CEOs than VPs is even more exacerbated in the Middle East. This may well represent an opportunity for entrepreneurial souls interested in pursuing the top job. The industry employs about 5,600 executives in the region with an overall +3.4% YOY growth rate.

From a specialization point of view (Chart 7), Information Technology seems to have been the key interest of late. LinkedIn cites a “very high” hiring demand in the region. Financial Services also rate highly in this regard. With respect to demand in the last 12 months, only Non-profit Management has slipped into negative territory.

As far as location is concerned (Chart 8), the UAE tops the bill in terms of executives employed in the sector. It also displays a healthy +5.6% growth rate. Saudi Arabia, Lebanon, and Jordan also share in the relatively high growth rate though from much smaller baselines. LinkedIn cites a number of locations as experiencing high or very high hiring demand as indicated at right. Note, we have also excluded Iran in this case. The jobs in Iran are not as readily accessible for political and perhaps economic reasons.

In the case of the Middle East, we will not delve into the employers. Internationally known companies such as Deloitte and McKinsey & Co. have such a small executive footprint in the region (18 and 6 respectively). The Barrett Group can, however, explore all of the local employers as a part of any specific career change program. 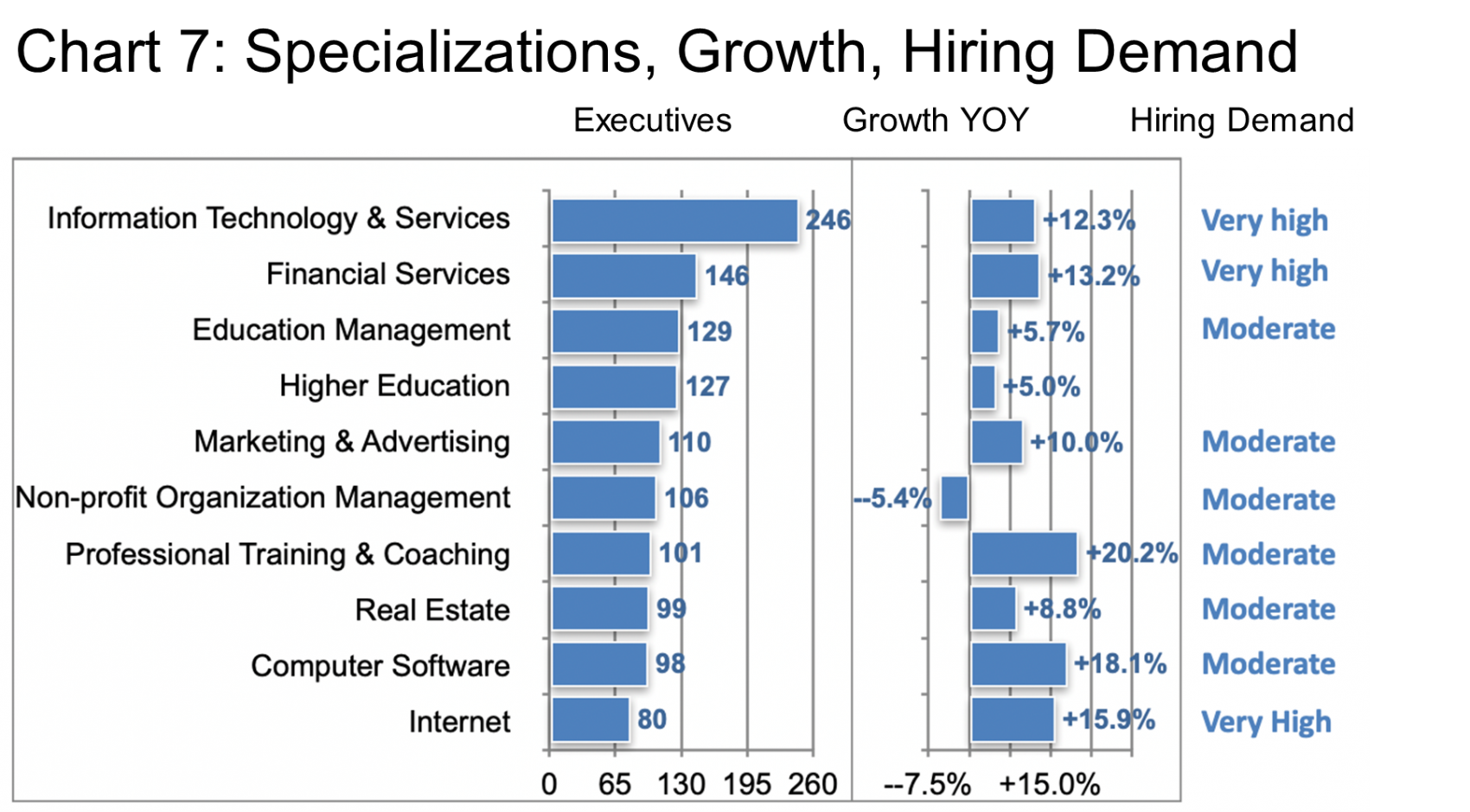 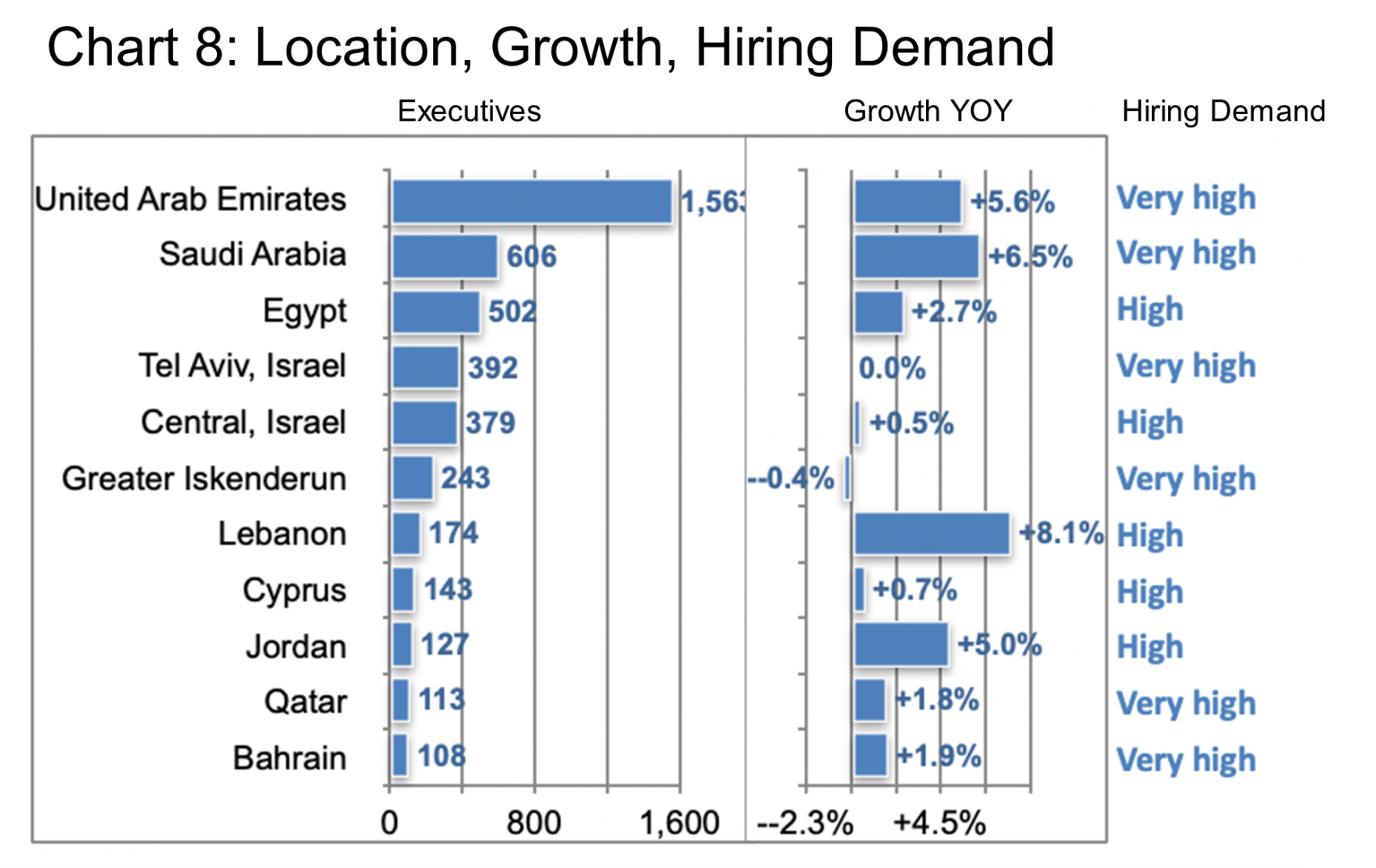