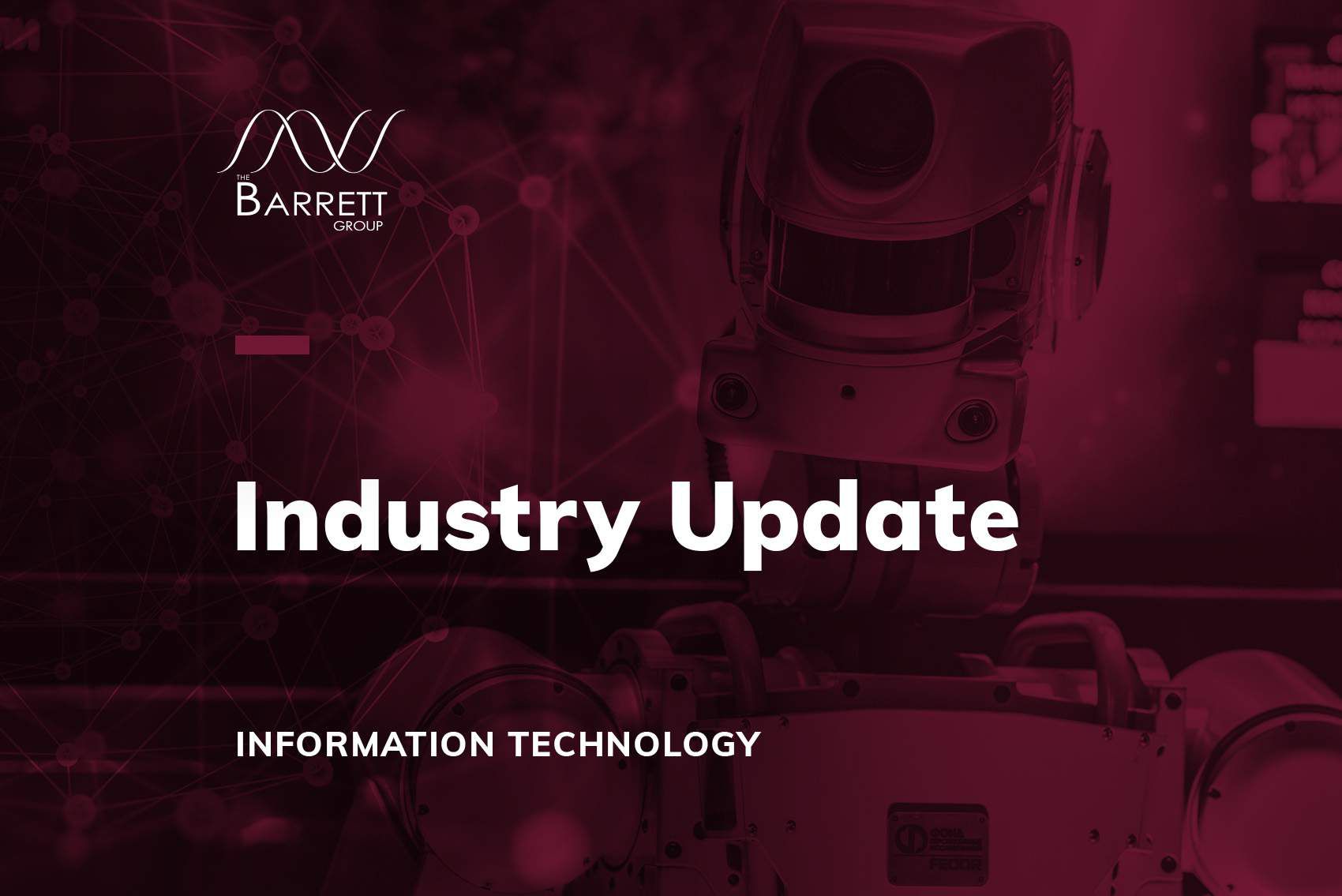 Information Technology – US and EU/UK

The critical importance of Information Technology (IT) in business is obvious in the meantime. So it is no wonder that IT has achieved its own C-level status in the form of CTOs and CIOs, etc. in the last few decades. Therefore we have added these titles to how we define “executives” for the purpose of this Update (See Editor’s Note for further details). Nevertheless, as an area of executive employment, this segment shows a surprising consistency and positive growth across the geographies we will cover in this update.

Per our definition, this industry employed about 109,562 IT executives in the US. This is an increase of 2% from the prior year. It also showed a modest churn of just 4,581 executives changing jobs in the same period. For the EU & UK cohorts, the total was very similar. 103,727 increasing 3% and the churn only slightly higher at 5,822. This relative stability, however, masks significant change at the company level. 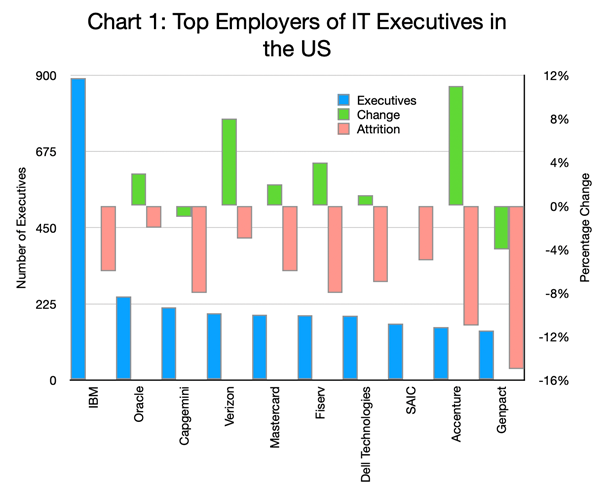 Among the top employers in the US (Chart 1) IBM stands head and shoulders above the competition. This is in terms of the total number of executives employed in the sector. While the attrition at the segment leader stood at 6%, overall, the number of executives remained quite stable. This is less true for the rest of the pack. They showed growth rates as high as 8% or even 11%, and attrition rates mainly in the single-digit range. There are a few notable exceptions in Accenture (-11%) and Genpact (-15%). Needless to say, a high growth rate and a high attrition rate (for example at Accenture) suggest a huge amount of change in the company.

In this Industry Update “executives” will generally refer to the CEO, CFO, COO, and Vice President titles only. Unless otherwise noted, the data in this Update will largely come from LinkedIn. It represents a snapshot of the market as it was at the time of the research. Is LinkedIn truly representative? Here’s a little data: LinkedIn has approximately 722 million users. 174 million in the US. 163 million in Europe. (See Source) It is by far the largest and most robust business database in the world, now in its 18th year. LinkedIn defines the year-over-year change (YOY Change) as the change in the number of professionals divided by the count as of last year. “Attrition” is defined as the departures in the last 12 months divided by the average headcount over the last year.

Digging into the dynamics at several key players, we find that IBM is showing a recent up-tick in departures (34 hires, 55 departures). The majority of the departing executives joined firms such as Kyndryl, Amazon (AWS), Red Hat, and CVS Health. There are no obvious trends in the relatively high attrition numbers for Capgemini or Mastercard. Fiserv shows a spike in departures in April.  Fiserv had three departing executives join Conduent and three new hires from JP Morgan Chase during the past year. Accenture has been on a hiring streak recently. They are recruiting from Deloitte, KPMG, and EY among others after losing a few executives to Amazon (AWS) and IBM. Genpact’s attrition occurred mainly at the end of 2020 (23 departures vs. 16 hires). Those departures leaving for IBM, Cognizant, Newmark, and Amazon (AWS)—two each. 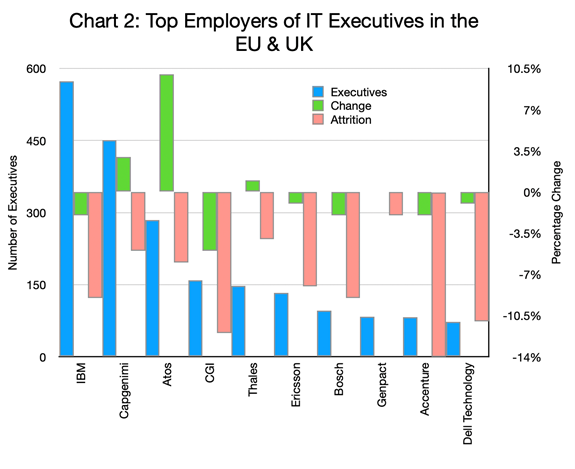 As evidence of the growing concentration in this business sector, the list of top players in the EU & UK cohort (Chart 2) includes five of the top employers from the US group. It also has five entries unique to the EU and UK at positions 3, 4, 5, 6, and 7 on the top employers list. IBM does not stand out as starkly in this ranking either, though it is also showing negative growth and higher attrition than in the US. Attrition seems to have ticked up recently at IBM in this geography. It shows 52 departures versus 29 hires (per LinkedIn) for a net minus 23 change in the executives as we define them. Where did these executives go? Notably, eleven of them went to Kyndryl, three to Salesforce, and two to Amazon (AWS).

CGI also shows a net loss of executives at the moment (6 hires, 20 departures). Exxeta AG and Capgemini account for four of these departures. But the rest are well distributed among other players. Both Ericsson and Bosch showed a spike of departures in late 2020 but their executive ranks have steadied through the balance of 2021. Accenture has also shown an uptick in departures quite recently (7 hires, 12 departures) to a very diverse group of hiring companies.

In the EU & UK cohort (Chart 2), Atos claims the highest growth rate at 10% year on year (YOY). Digging a little deeper into this high growth rate at Atos, we find that they hired executives mainly from Accenture, Dell Technologies, CBRE, and a range of less well-known players. They also lost a few to Cognizant, Expleo Group, and Accenture, too. Accenture in this grouping shows rather high attrition (-14%). But the deeper dive does not reveal any single net destination for these departures. Rather, they left for a broad range of companies across the EU & UK. 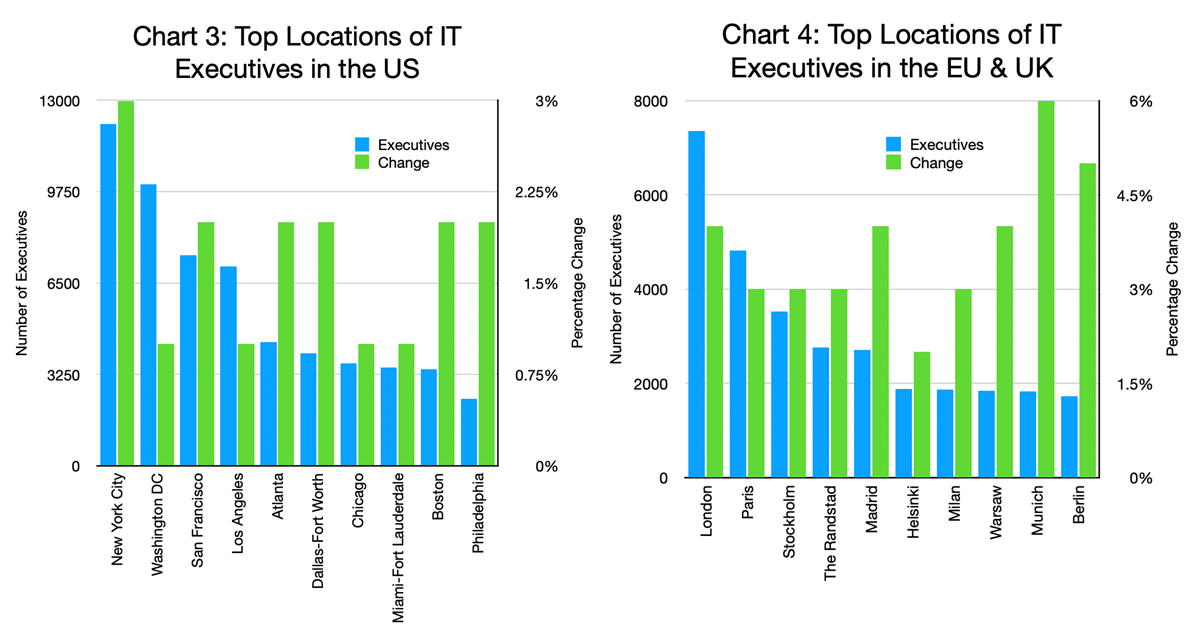 As far as where the executive jobs in the IT industry are, there are relatively few surprises in the US (Chart 3). New York tops the charts at more than 12,000 with 3% YOY growth and a hiring demand characterized by LinkedIn as “high.” That Washington DC comes second may indeed be a surprise. Though when one thinks about all of the government business available inside and around the beltway, perhaps this is not surprising at all. Belying their relatively modest growth rates, San Francisco, Dallas Fort-Worth, Chicago, and Boston all rate “very high” per LinkedIn in terms of hiring demand.

In the EU & UK group (Chart 4) London and Paris come out on top. But it is interesting to see cities such as Milan, Warsaw, Munich and Berlin also entering the ranking with strong growth as well. All of the European cities listed above are described by LinkedIn as having “very high” hiring demand. And indeed the overall growth in executives employed in the sector seems quite healthy.

As far as Fields of Study are concerned for this business segment (Charts 5 & 6), Business Admin and Computer Science vie for the top position. Finance and/or Economics, as well as Electrical Engineering and Marketing, also make the list.

We are disappointed to report that gender diversity is low in this industry. In the US, only 18% of these executive positions are filled by women. In the EU & UK cohorts, this ration drops to a mere 13%.

There is little significant variation between regions as to the top skills cited by IT executives. These include a mix of highly technical and more generalist attributes. (Chart 7) 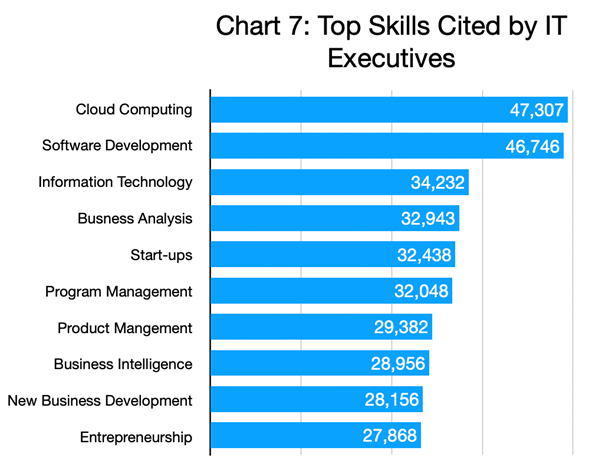 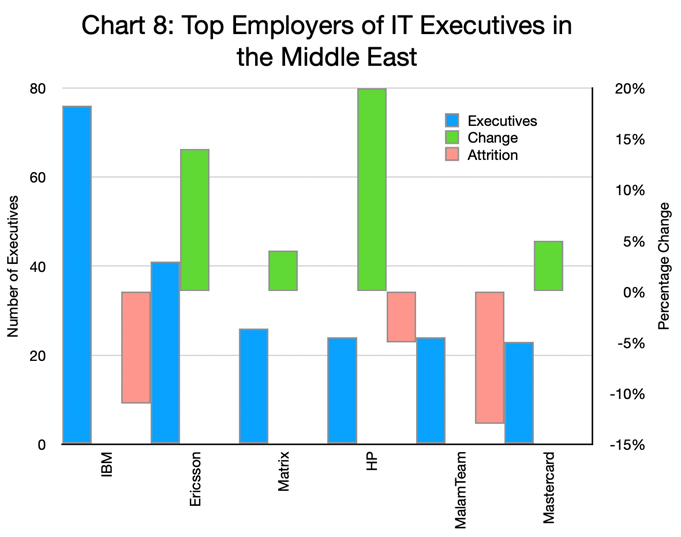 Let us take a moment to briefly explore how the IT executive role is developing also in the Middle East. As we have executives defined for this report, LinkedIn reports 17,280 executives in this industry segment in the Middle East. That number is up 3% against prior year with 1,057 having changed jobs in the past year.

Chart 8 contains the top employers of IT executives in the region per LinkedIn. It shows significant YOY growth at Ericsson and HP. This contrasts the high attrition at IBM and MalamTeam (Israel). 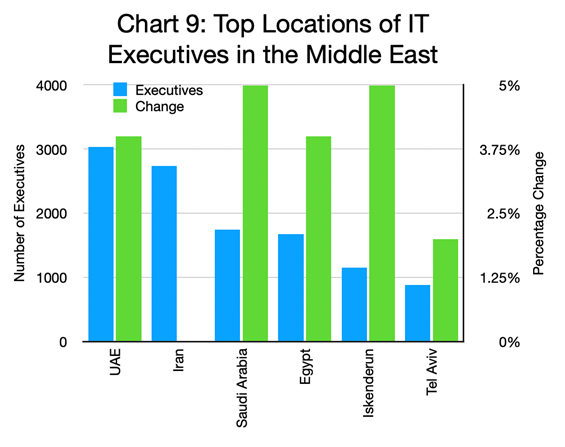 The key locations and growth rates in the region are contained in Chart 9. All locations are characterized as having “high” or “very high” growth in demand, except Iran (“low”).

Some executives may wonder whether they need to take recent developing trends in their industry seriously or just stay with what they know. In the IT sector, there are certainly a number of up-coming technologies worth taking a deeper look at. Here we have merged the geographies (US, EU, UK, and the Middle East). This is on the theory that the market for these technologies is probably a global marketplace with a rather limited pool of executives. 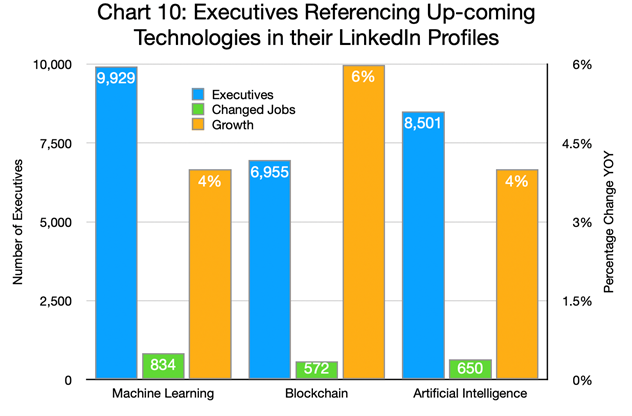 Chart 10 bears this assumption out. The total number of executives as defined above that have referenced these technologies is relatively limited. It is at less than 5% of the total executive pool addressed overall in this Update. It also exhibits a healthy growth rate of 4-6% YOY.

Per Charts 11 and 12, there are variations in the demand geography. It is interesting to note that London, for example, shows more interest in blockchain. This is in contrast to San Francisco which seems to prefer machine learning for now.

LinkedIn notes that most of these locations demonstrate a “high” to “very high” hiring demand for executives with experience in these technologies.

We suspect but cannot prove that some of the dynamics between the cities have to do with where employers in those cities are on the adoption curve. In other words, early investors versus “wait and see” followers, for example.

The largest employers of these executives are predictably also a relatively small group. IBM is employing the lion’s share. Obviously, companies’ focus appears to be quite different based on their hiring of executives with various skills in this area. Blockchain Corp. and Mastercard emphasizing blockchain, while others emphasize machine learning and artificial intelligence.

The first four companies on Charts 13 and 14 also exhibited very significant attrition vis a vis these executives ranging between 14-24% in the past year. IBM for example in the machine learning area gave up executives to Amazon (AWS), Salesforce, Philips, Toshiba, and CVS Health among others, while gaining talent from Red Hat and Accenture.

In the blockchain arena, IBM had a steady drip of attrition to Kyndryl, Salesforce, Fiserv, CVS Health, and even Microsoft. On artificial intelligence, the story for IBM is similar.

Genpact hired from Infosys and Wolters Kluwer in the artificial intelligence area and lost talent to IBM and Mindtree, but hired one blockchain executive from IBM.

Dell Technologies saw one blockchain departure to Lenovo, one gain from KPMG on artificial intelligence as well as one loss to Aptiv.

Booz Allen Hamilton on the other hand, has seen a net departure in the machine learning area in favor of Amazon (AWS) and Deloitte.