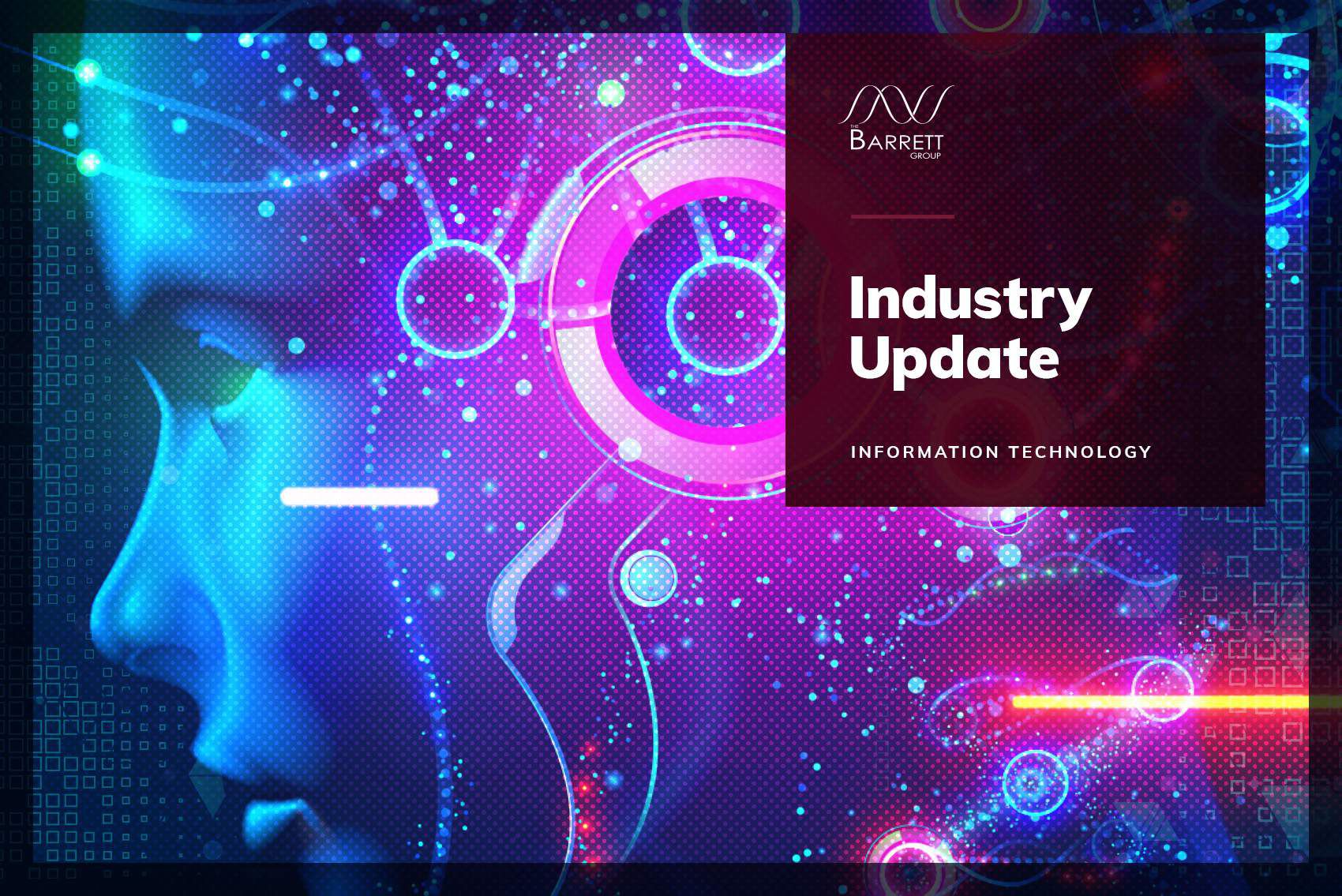 Researching this particular update, we were filled alternately with wonder and dread. That may be simply how it feels to be facing the opportunities and challenges in the information technology field. Especially, facing these challenges on the cusp of 2023.

Why wonder? Technology offers so many wonderful chances to improve the human condition—health, wealth, work-lives, and even perhaps enjoyment.

Why dread? The opportunities for abuse of security, spying, ransomware and other cyber crimes are growing exponentially. Also everyday objects collecting information and interacting with their users, or the bulk of us being left behind as certain social groups and/or enterprises move into the metaverse.

In any case, there are big changes coming.

Let us begin with the larger tech trends as they pertain to IT executives. You can probably find almost any technology you wish to identify in one of the numerous lists available when you search for “tech trends.” Several that seem particularly valid to us include:

If we make any of these sound sinister, they are not of themselves dangerous. Although in the wrong hands or used unethically, they all can be. This explains the corollary demand for enhanced cybersecurity that accompanies every technological advance.

IT professionals are certainly in demand, especially executives with the right skills. One source suggests that 52% of “technologists” at all levels interviewed are open to changing jobs in the next year.

The same source continues, “In just two years, the willingness to change employers has risen roughly 63 percent. From our research, this is likely a combination of increased salary opportunities, a desire for better work-life balance and remote work, and the increased importance of company reputation.” [See source.]

This underlines a key challenge that IT executives will continue to face: retaining qualified staff. This implies agility in managing a fluid staff with flexible compensation and perks, including a high degree of remote work and other desirable aspects of employer culture.

Meanwhile, as we will see in this Update, executive specializations have also evolved somewhat since our last report. They are shifting away from cloud computing toward artificial intelligence, blockchain, and IOT (the internet of things). Forbes takes these highly sought-after skills to a new and interesting level describing those most in demand as [See source]…

All in all, it seems that IT which once seemed to be a rather dry, unimaginative area of endeavor has morphed into a remarkably lively hot spot in recent years and that seems unlikely to change any time soon.

In the geographies of focus (US, EU, UK, and Middle East) some 378,000 executives are active. And we define them (see Editor’s Note) as active in the Information Technology and Services area. This population has grown by about 2% in the past year. While another 15,600 have changed jobs, bringing the total executive opportunities to a whopping 6% of the current baseline. Unusually, this population is larger in the EU, UK and Middle East (200,800) than in the US (177,300) and the churn (job changing) is also much higher at 4.8%

vs. 3.4% in the US. Both populations are decidedly male-dominated at 20% female in the US and only 14% in the EU, UK and Middle East. LinkedIn reports that the median tenure for these positions is about 3.4 years.

HP (1,411) and IBM (1,372) hold the overall top spots in terms of the number of executives employed though they switch positions depending on which geography one takes as a basis.

Not surprisingly, LinkedIn reports “very high hiring demand” for executives in this industry. Chart 1 examines in more detail how specific segments have developed over the past year, with VC & PE (+10.7%) taking the top spot in terms of growth, followed by Environmental Services (+9.6%), and Non-profit Organization Management (+9.1%), Renewables & Environment (+7.3%), and Internet (+7.2%).

Even the largest segments showed relatively strong growth as well, for example, Computer Software (+4.8%), Management Consulting (+4.4%), and Higher Education (+5.1%). In the top ten by number of executives, Marketing & Advertising, Telecommunications, Computer & Network Security, and Real Estate all came in under-proportionately on growth.

Sharp-eyed readers will immediately spot the fact that HP (Hewlett Packard) shows up twice on Chart 2. Showing up as both HP and Hewlett Packard Enterprises. The two companies were created by a split in 2015 when the business decided to separate its historical printer business (HP) from its services business (HPE). 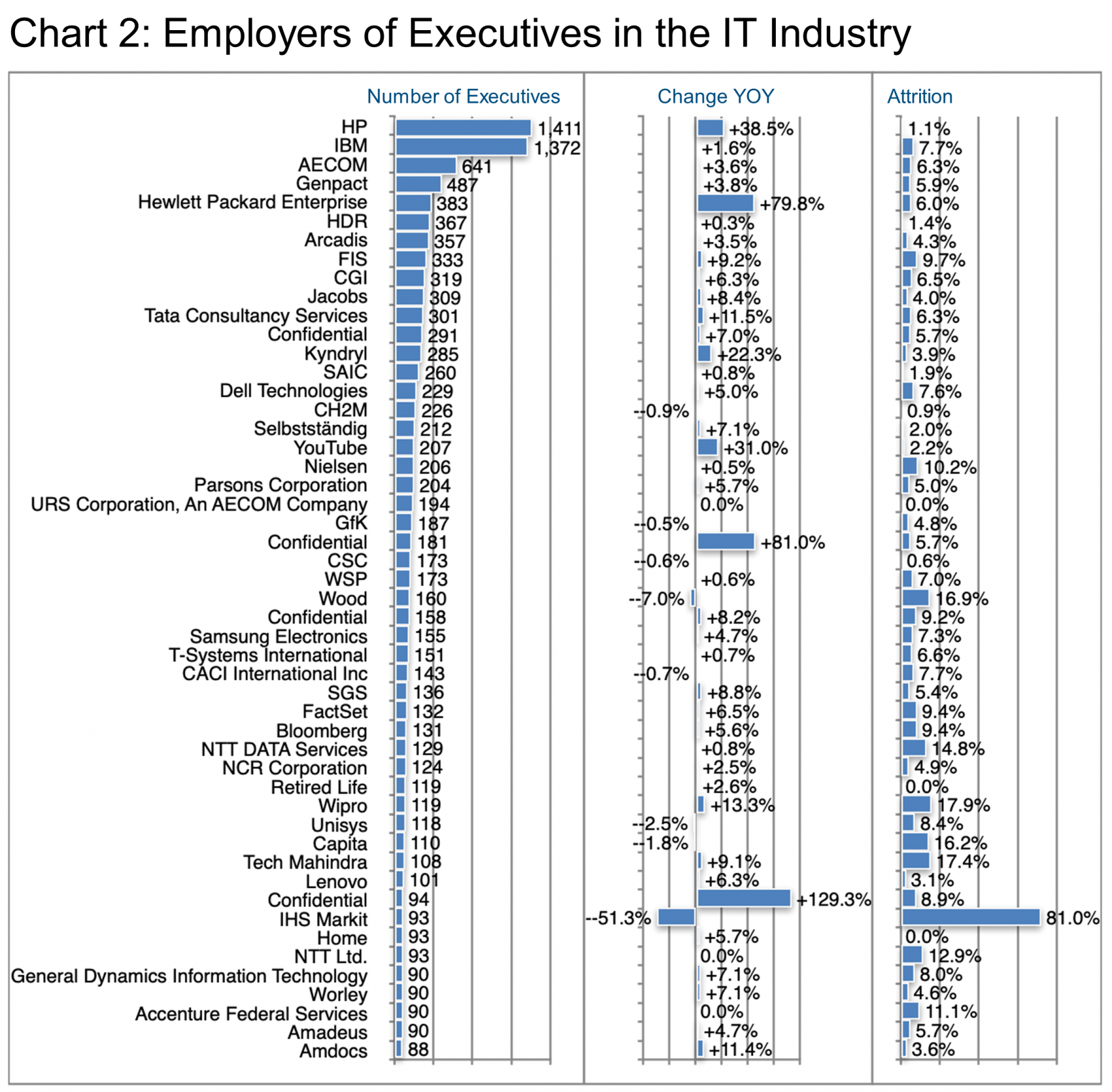 Both of these business grew strongly in 2022 mainly through acquisition, for example, HPE’s August 2022 purchase of Poly “a leading global provider of workplace collaboration solutions.”

IBM’s pace of growth might seem sedate by comparison, but the company has just announced the acquisition of Octo, a US-based specialist in helping government entities digitize their processes. Keep in mind, too, that Kyndryl (an infrastructure services firm) was also part of IBM until November of 2021 when it was spun off.

Then YouTube also stands out, of course, having hired approximately 20,000 employees in 2022, including some executives, mainly from its parent company Alphabet (Google), but also from Amazon, Meta (Facebook), TikTok, Spotify, Twitch, Microsoft, Twitter, and Fiverr—a veritable who’s who of tech and social media players.

IHS Markit was acquired by S&P Global in February 2022, hence the huge attrition.

Executives on LinkedIn typically have more than one specialization, so please do not be surprised at the absolute numbers on Chart 3. Still, the ranking shows us the relative supply of talent from a skills point of view. As usual, there are many highly specialized skills perhaps only applicable to this industry (such as Cloud Computing or Software Development), as well as many more transferrable skills that could help executives transition into or out of this business area (including New Business Development, Business Analysis, Sales Management, etc.). 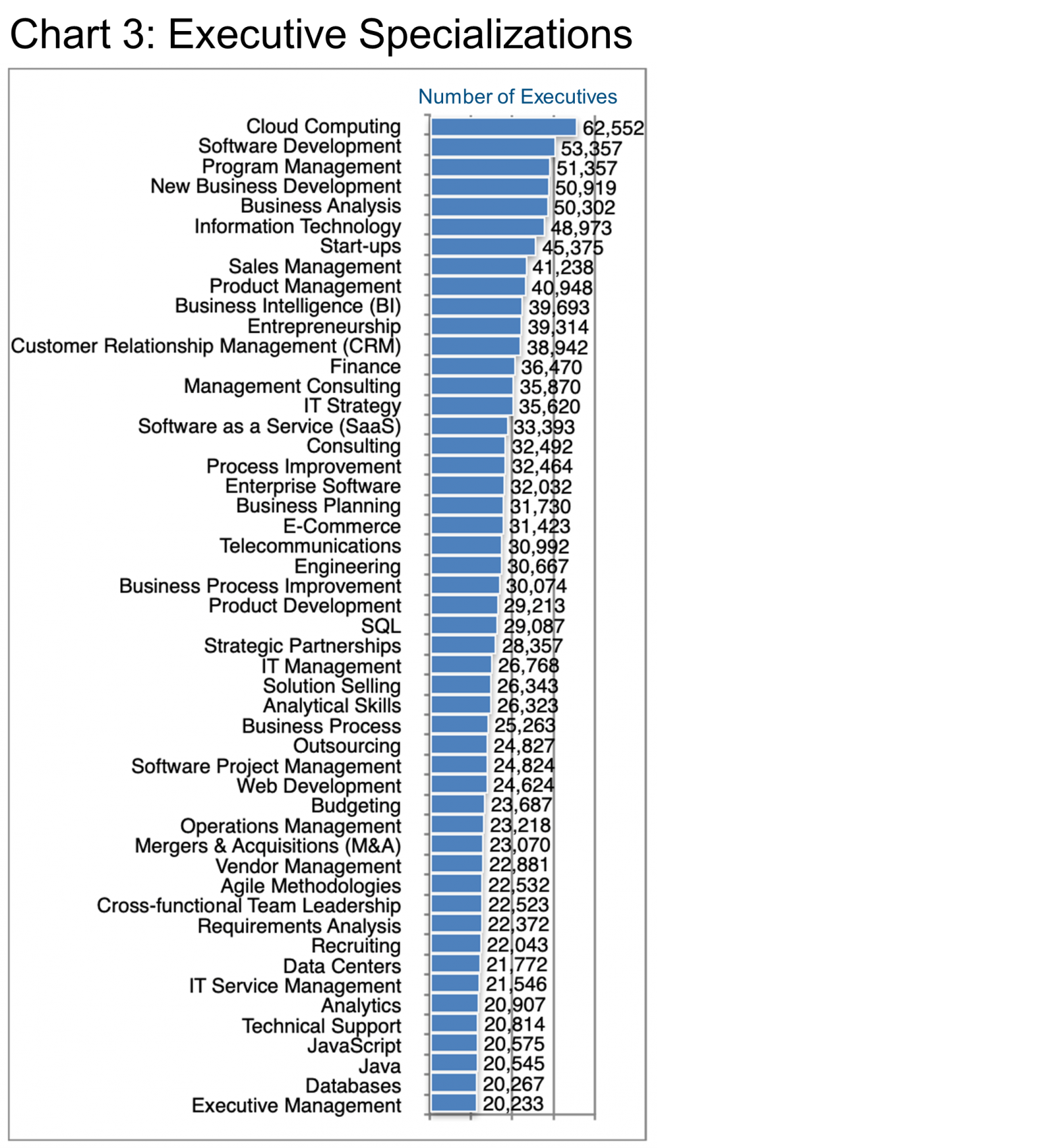 Less obvious are the up-and-coming specializations in this industry. We examined a number of these below and have noticed the relative increase in Blockchain and the internet of things (IOT). We kept the search terms deliberately broad (such as “Robot” or “Autonomous”) so as not to exclude too many specific niches. One observation is that the churn rate is relatively high across the board presumably because these specializations are in high demand.

Next, the growth rate shows a sudden pick up in interest, for example, in the artificial reality or “metaverse” area. We will see how these extra-special areas of focus evolve going forward, but for now they generally seem fairly promising. Many of them cluster in geographic areas, too, by the way. For example, overall San Francisco is not showing as much growth as a few years back, but in some of these specializations it remains quite the hot spot.

Speaking of location, Chart 5 provides an overview of where most executive positions are located in this industry, though given the growing prevalence of remote working this is more likely an indication of their place of employment than their place of work. 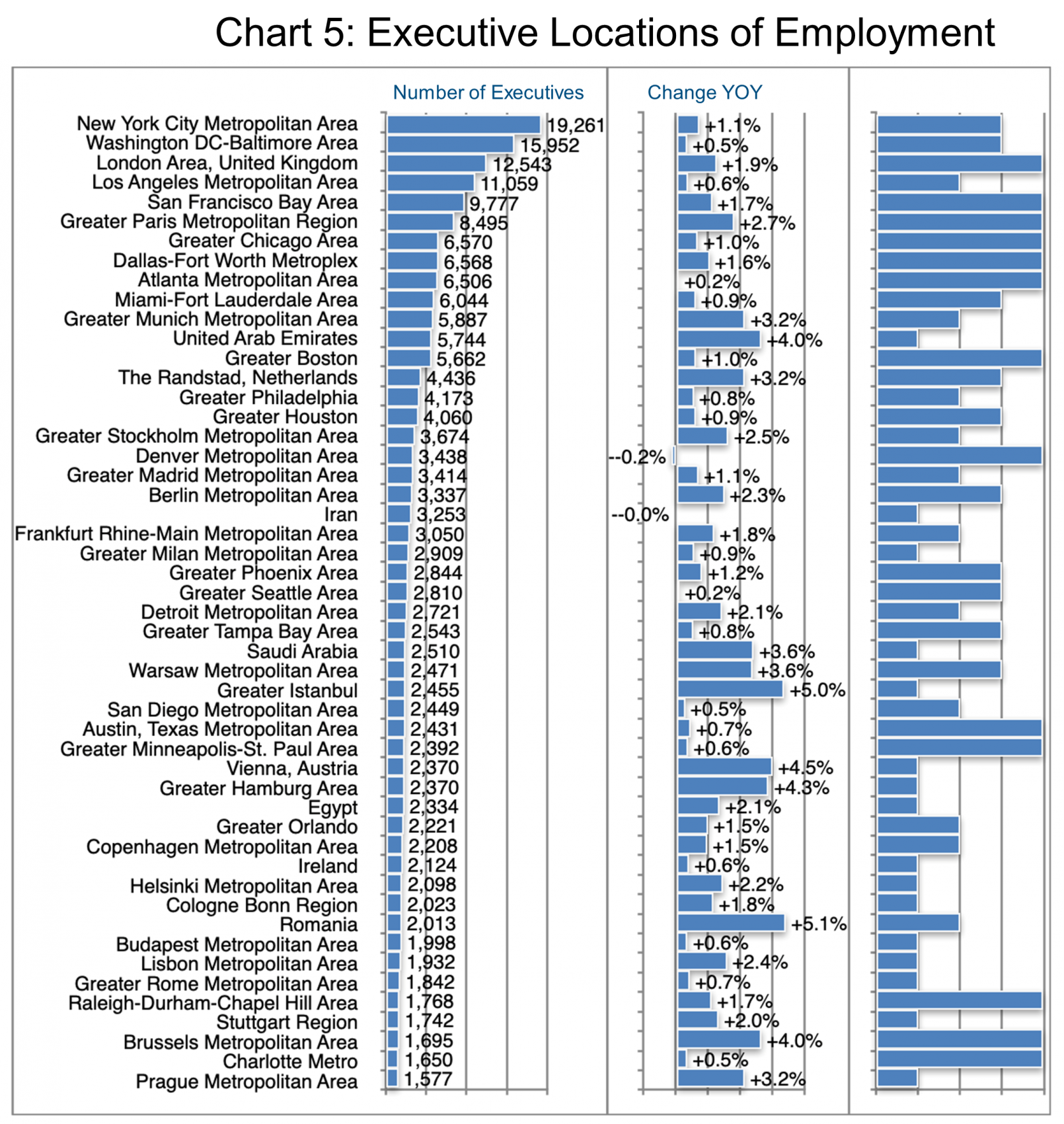 Therefore, our client teams provide very detailed research data for executives targeting specific locations, companies, or segments, including background information on individual executives who may be involved in a particular hiring process, however, to give readers a feel for who’s who, here are a few sample locations and the largest employers of executives in each:

Certainly more important than the mere growth numbers are the indications at far right on Chart 5 showing the relative hiring demand as determined by LinkedIn, whether Low (L), Moderate (M), High (H), or Very High (VH).

And our clients receive support from a six-member team including a research specialist who can provide broad-brush screening industry data from our data bases of more than 800 million companies and individuals as well as drilling down into highly granular company, location, and executive-specific information as may be required in preparing for a key interview. Read Research to the Rescue for more information.

Is LinkedIn truly representative? Here’s a little data: LinkedIn has more than 800 million users. (See source) It is by far the largest and most robust business database in the world, now in its 19th year. LinkedIn defines the year over year change (YOY Change) as the change in the number of professionals divided by the count as of last year and “attrition” as the departures in the last 12 months divided by the average headcount over the last year.