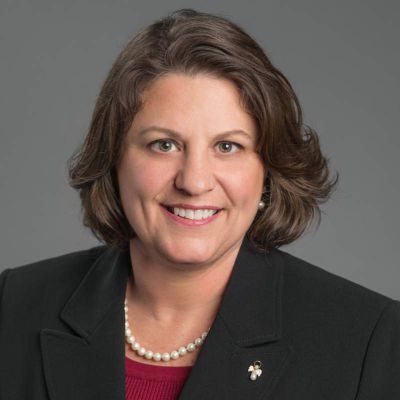 Client: Tracy Katz was senior operations manager at a bank headquartered in the Southeast.

Challenge: When her company of 20 years underwent a merger, Tracy found the newly available roles unappealing and wanted professional help transitioning to her next career.

Process: Expanding her network and leveraging LinkedIn yielded a key ally at Tracy’s target company, who helped her navigate several job opportunities there.

Landing: Despite a roller coaster ride of promising job opportunities at her target company that didn’t pan out, Tracy’s optimistic persistence was rewarded with an offer of senior trainer for a bank operating system.

Study: As a 20-year veteran of a Southeastern regional bank, Tracy Katz acquired a broad range of expertise in the financial services industry, including sales, service, training, and project management. Over time, she married these skills, becoming a specialist in operational effectiveness, business transformation, and change management, and a go-to person when departments merged or other complex projects arose. Ironically, however, when her company merged with another bank, she found the available employment opportunities in the new entity unappealing, not least because they required relocating. So, she opted for a severance package.

“I had been with my company for 20 years and was ready to try something new,” said Tracy. “The severance was really good – about a year’s salary – and I thought with all my experience I would have a job within a few months.”

In the end, however, it took much longer – and a few disappointments – before Tracy began the next chapter of her career.

Anticipating her departure, Tracy researched career coaching services early on and hired The Barrett Group to help with her career transition.

“I had done a lot of things in banking and I wanted to explore my passions. I wanted to do something different and I wanted The Barrett Group to support me in figuring out what that might be,” said Tracy.

Tracy also had two big concerns. First, after 20 years with one company, she felt she had little experience in the job seeking process. Second, she felt that she was a horrible interviewee.

“I don’t tell my story well. Yes, I have accomplished many great things, but I am insecure talking about my successes. During a job hunt, however, you have to do that,” said Tracy. “I needed help identifying my accomplishments and learning how to share them effectively during an interview.”

Tracy began the TBG program by developing a personal strategic plan with her Clarity coach, in which she identified her values and mission. She found the sessions very valuable. She learned that she wanted to be a leader in operations for a mid-size company in Florida. She wanted to work for a company with a strong brand, a great culture, a quality reputation, and integrity. Tracy is a problem solver by nature and wanted to find a role where she could fix things and help others.

Tracy’s job hunt got off to a promising start. She interviewed at a local bank with a new position for a process improvement engineer. But just when she expected to get an offer, the bank announced a merger and the position was shelved indefinitely.

Then Covid hit and Tracy found that many jobs were either unavailable or frozen.

“I got interviews but not as many as I thought I’d get, and I didn’t get selected for them. Also, there were few jobs available at my level. It seemed people were staying in their jobs due to the uncertainty,” said Tracy.

Tracy began working with her career consultant, Julie Mathern, who taught her how to strengthen her network and build social capital as the first step in her job search, then how to navigate LinkedIn Analytics – both critical to finding jobs in the unpublished market.

“You have no idea how helpful it can be!” said Tracy. “Julie taught me that, instead of applying for jobs cold, I should find resources within a company that could connect me with a hiring manager before applying. You won’t get a job if they don’t know who you are or if you don’t come with a referral. That was a great lesson!”

Tracy also learned a lot about interacting with recruiters through LinkedIn and turning messages and emails into phone conversations and, ideally, relationships. This tactic proved particularly useful in Tracy’s exchanges with one key recruiter she’d met early on.

“A recruiter at a company I was really interested in connected with me and we exchanged chats about a training position that would open up in a couple of months. Using LinkedIn Analytics, I located Jennifer, director of training at the company, who responded to my LinkedIn message. We had a great phone conversation and developed a personal connection.”

When the position did open up Tracy reached out to Jennifer, who helped her get an interview.

“I went through two weeks of interviews and thought for sure they would make me an offer only to find that they hired someone else. I was devastated,” said Tracy.

Trying to stay optimistic, Tracy refocused and continued networking. Other opportunities and interviews came and went. Two months later an opening for a product manager position at Jennifer’s company popped up in her searches. Tracy contacted Jennifer again to ask whether Tracy might be qualified.

“She got back right away to say, ‘Yes!’. She also told me about two other positions that I was qualified for,” said Tracy.

Thrilled, Tracy applied for two of the positions, with Jennifer facilitating and sending a personal recommendation to boot. Yet again, despite another great round of interviews, Tracy was denied both positions.

“It was a roller coaster of emotions,” said Tracy. “I knew I was a strong candidate and I didn’t know why I wasn’t getting picked. I was trying to learn from those experiences. I had two very strong interviews with this company and thought, “The third one will be the charm.”

Tracy told Jennifer she wasn’t selected and that she would continue to look for jobs at her company. Jennifer, very impressed with Tracy’s positive attitude, emailed Tracy a few weeks later to discuss a budding opportunity for a third time – this time, a position that she was creating with Tracy specifically in mind – a senior trainer of banking software for a major client.

Tracy is so excited to finally join the company she interviewed with on three different occasions. She credits her success in large part to The Barrett Group.

“I knew I really liked this company, and it was Julie Mathern who taught me how to leverage my resources in a way that proved most beneficial,” said Tracy. “Thanks to that, I connected with Jennifer who got me the job at the end of the day. This has been a great experience.”
2022 © The Barrett Group | Privacy Policy (US) | Cookie Policy (US) | Disclaimer