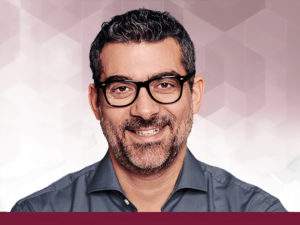 Client: Lawrence spent nine years as corporate counsel for a private firm that provides IT solutions for the digital workplace.

Challenge: Lawrence sought an exit when a failed merger roiled his company, but after nine years in the same job, he needed professional help to be successful in his career transition.

Process: A natural introvert, Lawrence found executive coaching support invaluable in building and strengthening his network and beefing up his interview and negotiating skills.

Landing: After a year of job hunting that included many disappointments, Lawrence landed a more senior position offering greater responsibilities and better compensation at an exciting, growing company.

Study: Lawrence was contract counsel and project manager at a firm providing IT services that enables digital workplaces. He created multimillion-dollar agreements, counseled leadership on contract compliance and policy, and oversaw monthly reporting. He enjoyed the position, but, after nine years at the same job, he faced few new challenges and little opportunity to advance. When the loss of one of Lawrence’s largest accounts coincided with the aftershocks of a failed merger, Lawrence knew it was time to formulate an exit strategy.

After so many years at one company, Lawrence knew that his job searching skills were rusty and that he would probably benefit from professional help. His suspicions were confirmed when two to three months of job hunting on his own yielded few leads. He started researching executive coaching firms and found The Barrett Group (TBG).

“I tried job boards and LinkedIn, but what I was doing wasn’t working. I was concerned that I wasn’t prepared for a hard job hunt that would require good interview skills, an impressive resume, and finding the right people to talk to,” said Lawrence. “The Barrett Group offered services for everything I needed – and it also had the same name as me!”

“Clarity highlighted goals of mine that I hadn’t prioritized, and it compelled me to consider what a career change could mean for me and my family. It made me step back and realize where I was going wrong,” said Lawrence. “I hadn’t thought about how best to advance my career to ensure my family and career were secure. If I had stayed on the path I was on, I could easily have ended up with a career that I was unhappy with.”

Lawrence had always thought it would be easy to advance his career but, he realized, it wasn’t happening. Clarity forced him to think about what he wanted and to design a plan to achieve it.

“I asked myself, ‘Do I want to take any job coming down the pike, or do I want to make my own path?’” said Lawrence.

In TBG’s Phase 2, Lawrence enjoyed working with career consultant, Greg Emslie, who was very thorough. Greg helped Lawrence understand and improve on all the elements of a good job hunt. Like using LinkedIn effectively, interviewing well, crafting a good resume, and especially connecting with people.

“I didn’t fully appreciate the need to leverage my network. I have always thought that education and accomplishments should stand on their own. It was hard for me to understand that the job market isn’t a meritocracy. Greg showed me that it’s not what you know, it’s who you know,” said Lawrence.

Despite that lesson, Lawrence’s initial efforts to build social capital were seriously hampered by his natural introversion.

“I’m very introverted and it’s hard for me to reach out to people – even former acquaintances. I needed someone to help me step out of my comfort zone. Greg was very patient with me, and he pushed me when I needed it. He convinced me that I have to get my accomplishments in front of the right people if I want to be successful. And friends can point me in the right direction,” said Lawrence.

It took a while for Lawrence to follow through with the tasks Greg assigned him. But when he finally began putting in earnest effort, he saw results. He felt more comfortable connecting with people and the number of interviews he got really picked up.

Job hunting was much harder than Lawrence had expected, and doing so during Covid didn’t help. Throughout his search, Greg imbued Lawrence with confidence, which helped him stay the course of TBG’s program.

“There were a few heartbreakers. I went through multiple rounds of interviews and felt like it was a good fit, only to lose the job to someone else,” said Lawrence. “That was rough.”

Then one day, after nearly a year of searching, he saw an interesting job on LinkedIn at a small, dynamic fintech company. He noticed that an old grad school acquaintance held a senior level role at the company. And he reached out to her.

“The fact that I could say to someone who worked there, ‘Hey, I know who you are!’ gave me an edge. I didn’t know her well, but having that connection really helped. She helped me get my resume on the desk of the right people,” said Lawrence.

Before long, Lawrence was offered an interview and then a job at a more senior level and a higher compensation than he had had previously. He is thrilled to have landed at a company with great people and close proximity to the executive team.

“The company is not just interesting, it’s also growing. I’m in a higher position with more visibility, and I’m involved with some big deals with large companies and brands. Plus, the people at the company seem really happy to have me joining them!”