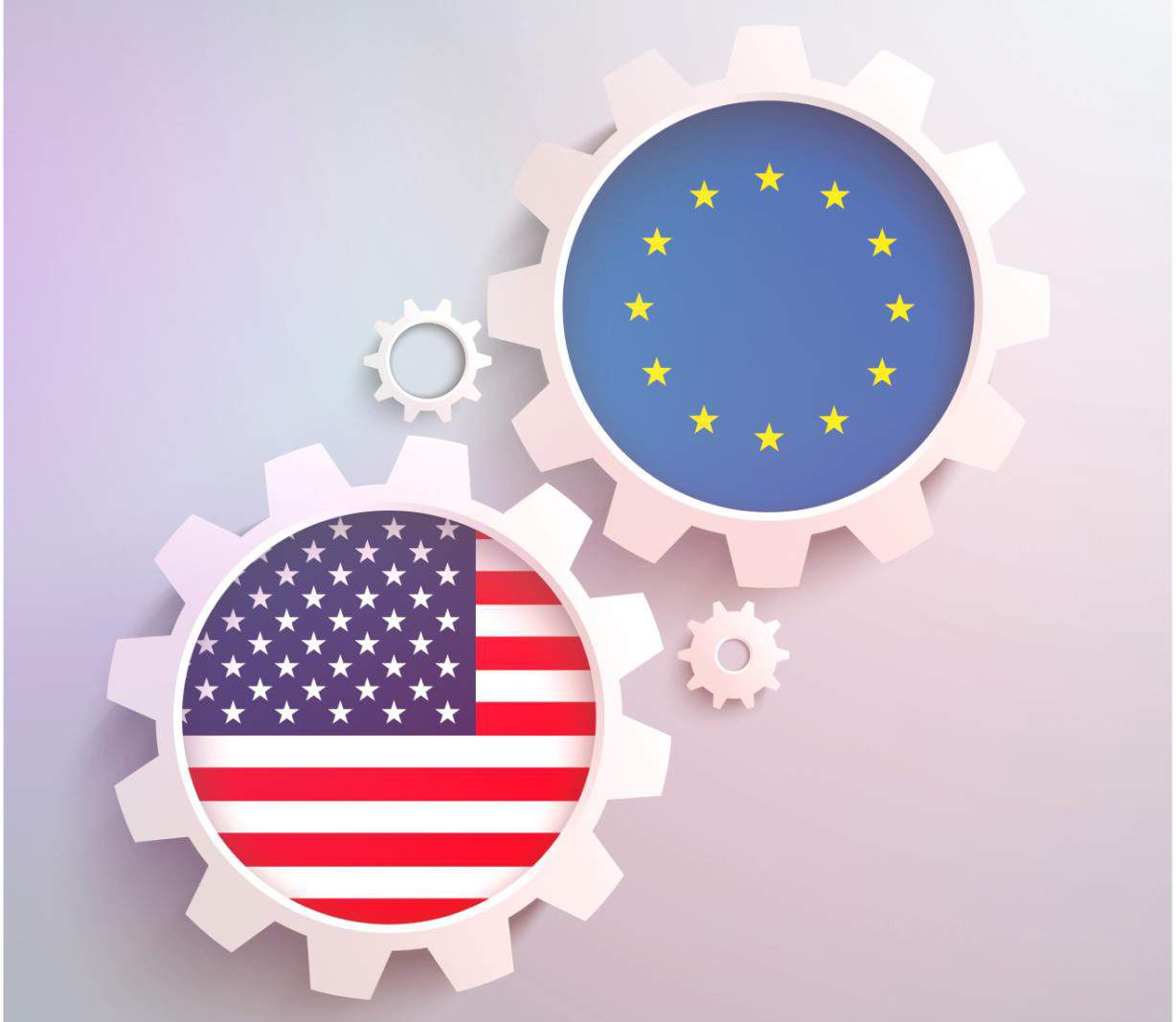 “What do you do for a living?” This question is a common conversation starter in the United States. Americans, whether they meet in a professional or a social setting, first and foremost always seem to talk about work. The same question asked of someone in France, by contrast, is likely to be met with disdain. “In France, asking someone what they do for a living as part of making a new acquaintance is vulgar,” said Carole Gagliardi, a French manager of a New York City art gallery.

Whereas Americans typically tie their identity to what they do for work, the French – indeed, Europeans in general – are loath to define themselves by a job. In Europe, work is merely a vehicle to living the life you want. Employment is just one piece, along with family, friends, hobbies, and other interests, that comprise the whole of a person.

Americans live to work; Europeans work to live. So, goes the standard saying – and it may even be true. If so, it would explain a lot of the differences in the work world of the United States and Europe. But is it true? And what are the differences?

Here’s a broad comparison of working standards between the United States and Europe.

Love it or hate it, America’s work culture is famous (infamous?) for long hours, anemic vacation time, and several other daily practices that make Europeans cringe. In 2017 The Independent published a cheeky article entitled “6 American work habits people in other countries think are ridiculous.” Not surprisingly, top of the list was “Americans work crazy long hours” (a topic we will get to later). The article also highlighted work breaks – rather, the lack of them.

In truth, there are significant differences in work culture. In the United States, federal law does not require lunch or coffee breaks. And while most people do take lunch breaks, regular coffee breaks are hardly institutionalized as they are in many European countries.

Germans, for example, commonly take a 15-minute coffee break once or twice per day. In Sweden, ‘fika’ is a custom of drinking coffee and eating treats with others. It is an important national tradition whether at work or at home. And Spaniards are very serious about taking a coffee at ten or eleven o’clock each morning.

Although the two- or three-hour lunch break is largely a relic of the past in many European countries, especially in the big cities, Europeans still typically spend 45-60 minutes eating their midday meal, and they are encouraged to do so away from their desks. In fact, until this year it was technically illegal in France to eat lunch at your desk. (To be fair, though, it might be challenging to find any French police enforcing that law). The regulation, which is an effort to protect the celebration of gastronomy and conviviality so important in French culture, was a victim of the pandemic. Notably, it is expected to be reinstated when the pandemic ends.

For Americans, by contrast, lunch time is short, perfunctory, and often, a desk-dining experience. According to a 2015 study, a whopping four out of five Americans eat work lunches at their desks – sometimes while working.

One insidious American work habit that Europeans endeavor to resist is that of continuing to work long after the standard workday ends. The practice was already common before the pandemic, and remote working has exacerbated it. Americans see work emails flow into their inbox incessantly, depriving them of any sense that they can disconnect from their work.

Europeans, on the other hand, are more respectful of the delineation between work life and personal life. There are still people who work long hours. Although a cocktail of cultural norms, government regulations, and company policies effectively limits overall employee work hours to protect their health, safety, and quality of life.

Even before the pandemic hit, some countries were already taking steps to protect workers from the creep of constant work demands into their personal lives. In 2016 France adopted the region’s first legislation related to the “right to disconnect.” Italy and Spain followed suit in the ensuing years. Germany has approached the problem not through legal measures but through company agreements at the multinational level.

The details of each country’s rules vary, but the thrust of them is to protect a worker’s right to not respond to communications from work outside the business’s core business hours. This year the European Parliament recognized the worsening of the situation since the pandemic began and started pushing for a bloc-wide directive on the issue.

Does a right to disconnect even make sense in a remote-work world? Who knows? But Europeans are having that conversation. Meanwhile, in the United States, Americans are too busy reading their emails.

Circling back to work hours, Americans often pride themselves for being some of the hardest workers in the world. According to the Organisation for Economic Co-operation and Development, they’re not wrong. The latest OECD data ranks the U.S. among the top nations for average number of hours worked. (Defined as total number of hours actually worked per year divided by the average number of people in employment per year). In 2020 that number was 1,767 hours.

The stereotypical explanation for this discrepancy is that Europeans savor “la belle vie.” They want to enjoy the good life. Americans, on the other hand, are driven by a strong, protestant work ethic. In other words, each region is motivated by cultural differences.

That may be true, but it’s only part of the picture. Structural issues are also at play. For example, the European Union caps the number of hours employees can work per week at 48. And unions, which are much more powerful in Europe than in the U.S., effect better protections for workers.

It’s worth noting that the OECD hours worked exclude time not worked because of public holidays, vacation, sick leave, and maternity and parental leave. Which Americans enjoy far less of than their European counterparts.

When it comes to paid time off, the United States is an outlier. According to a 2019 think tank report entitled “No-Vacation Nation”:

The U.S. is also the only country in the OECD that does not mandate any paid leave for new parents. (Although some states offer it and four weeks of paid leave is currently part of the budget discussions in Congress.) In the European Union, by comparison, mothers are entitled to 22 weeks of paid maternity leave on average.

It begs the question whether Americans would also work fewer hours if given the chance.

There is no question that Europeans are hard-working during the hours that they do work. When you compare the productivity of Americans and Europeans you find that the productivity of Europeans is quite competitive with that of the U.S. Despite the dramatic disparity in hours worked between them. (See chart) 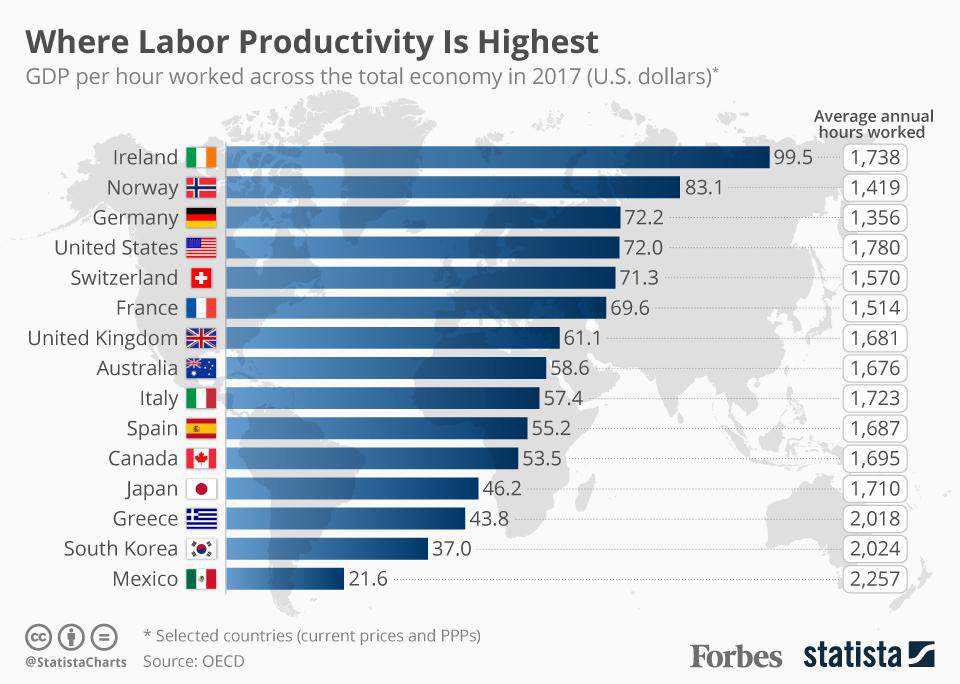 So, what explains the large difference in work hours? Why do people in similar economies and social structures have different labor patterns? Because of culture or, rather, structural differences?

That was the topic of some interesting research undertaken by Edward C. Prescott, economist at Arizona State University. He didn’t buy the cultural differences argument. His answer: Taxes.

According to Prescott, Europeans supply less labor because higher taxes in Europe make consumption more expensive than leisure. Economists assume that people everywhere work mainly to consume goods. In which case they’ll work less when those goods become relatively more expensive, and they will come to value cheaper options instead – namely, leisure.

To be sure, taxes create fundamental influences in work standards on both sides of the Atlantic. But so do many other things. Health care, which is largely employer-based in the U.S. but is managed at the national level in Europe. Retirement savings, which are more generously provided for in Europe than in the U.S., and unions, which enjoy great bargaining power in Europe in contrast to their American cousins (who are in crisis).

Going forward, new developments are likely to shape work standards, such as climate change and the environmental costs of work activities, or Covid-19 and the new office protocols and mandates it will engender.

So, do Americans live to work and Europeans work to live? Do we make our work standards, or do they make us? Whatever the answer, perhaps we should think twice about how to start a conversation with the next person we meet.

Read next: “Building Confidence in Your Value Proposition“