How Can You Endure Unsustainable Work? And Should You? 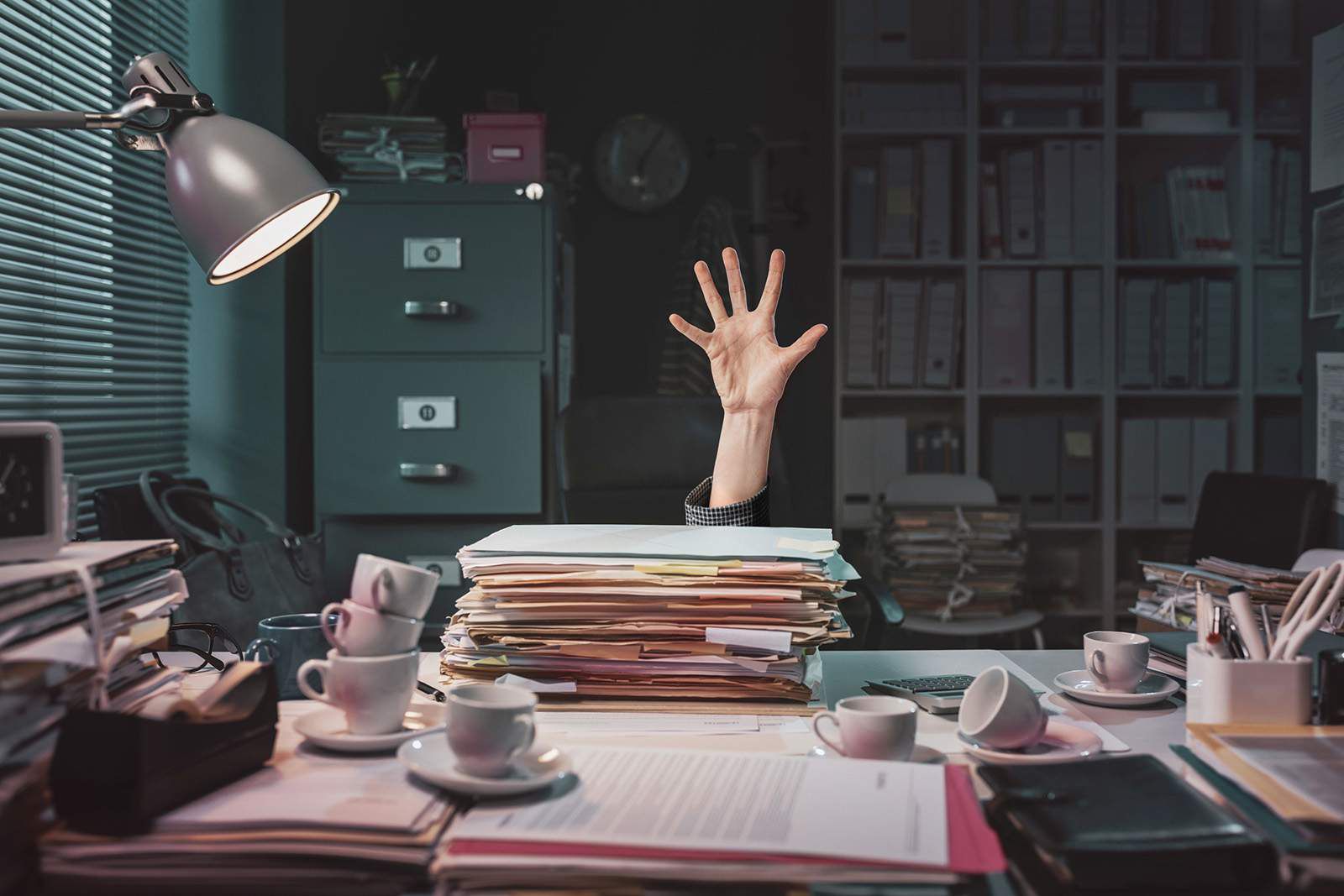 “HELP WANTED BADLY,” read the sign taped to the entrance of the specialty food shop. “BARISTAS, SANDWICH MAKERS, CHEESEMONGERS, ANYONE WITH A PULSE. NO EXPERIENCE NECESSARY.” It was just one of many job advertisements spotted recently in the downtown doorways of a midsized city in Massachusetts. But it’s a particularly compelling example of the nagging persistence of the “Great Resignation,” which has left businesses understaffed nationwide.

The trend of mass quits that began in early 2021 has hit the hospitality industry especially hard (of which food shops are part). But all sectors have seen quit rates climb – and there are few signs that the trend is abating. In fact, in the most recent government jobs report, total quits ticked up to 4.2 million. That is higher than the 4 million quits in April 2021 that made headlines for being the highest number of quits in 20 years.

How Many Hats Do You Wear?

When Kayvon Bahramzaden first joined a growing, private, European market research firm, he wore one hat. His role was to support the global head of business development in building a global sales and corporate development strategy. He and his boss were a two-person show. After a year’s work, they developed a plan and prepared to launch it. Then his boss left the company.

Rudderless, Kayvon appealed to management for direction as he shouldered his manager’s role. In response, they tasked him with financial planning and analysis work – on top of his corporate development responsibilities. Later, the job of a co-worker in Germany taking parental leave was layered on top of his responsibilities, too.

“I was doing three completely different jobs in different time zones. I got little support and no additional compensation. It felt like I was floating around the organization,” said Kayvon. “I felt like an external consultant, not an integrated part of the team and the operations.”

Kayvon’s experience is hardly unique. Stories abound of people absorbing the workload of departing coworkers until a replacement is hired, only to discover later that hiring a replacement is not part of the company’s plan. Assuming a second, maybe a third, job when needed becomes a work expectation. And only if you’re lucky are you compensated appropriately, if at all.

When you’re overworked, unsupported, and unappreciated, what do you do?

Quitting is an option, obviously. But, high quit numbers notwithstanding, quitting isn’t always easy – especially when you have a family to support and bills to pay. Plus, you have no certainty that a new job won’t turn out to be just as miserable…or worse. Sometimes it’s better to stick with the devil you know.

An easier solution for some, albeit not without its problems, is to check out mentally from the job.

This summer a new buzzword lit up search engines: “quiet quitting.” The term relates to employee disengagement from work, although people disagree on the exact meaning. Supporters define it as “engaged workers setting reasonable boundaries.” (That is, employees pushing back against unsustainable work life by limiting their hours and resisting taking on unreasonable workloads.) Detractors, on the other hand, view quiet quitters as “slackers who are willfully underperforming.”

Global analytics firm, Gallup, defines quiet quitters as “people who do the minimum required and are psychologically detached from their job.” Although career experts largely believe quiet quitting is a career mistake, Gallup estimates that people who engage in it make up at least 50% of the U.S. workforce, nonetheless. According to its analysis, the proportion of engaged workers is currently 32%. Meanwhile, the percentage of “actively disengaged” employees has increased to 18%.

“Most employees who are not engaged or actively disengaged are already looking for another job,” reports Gallup. 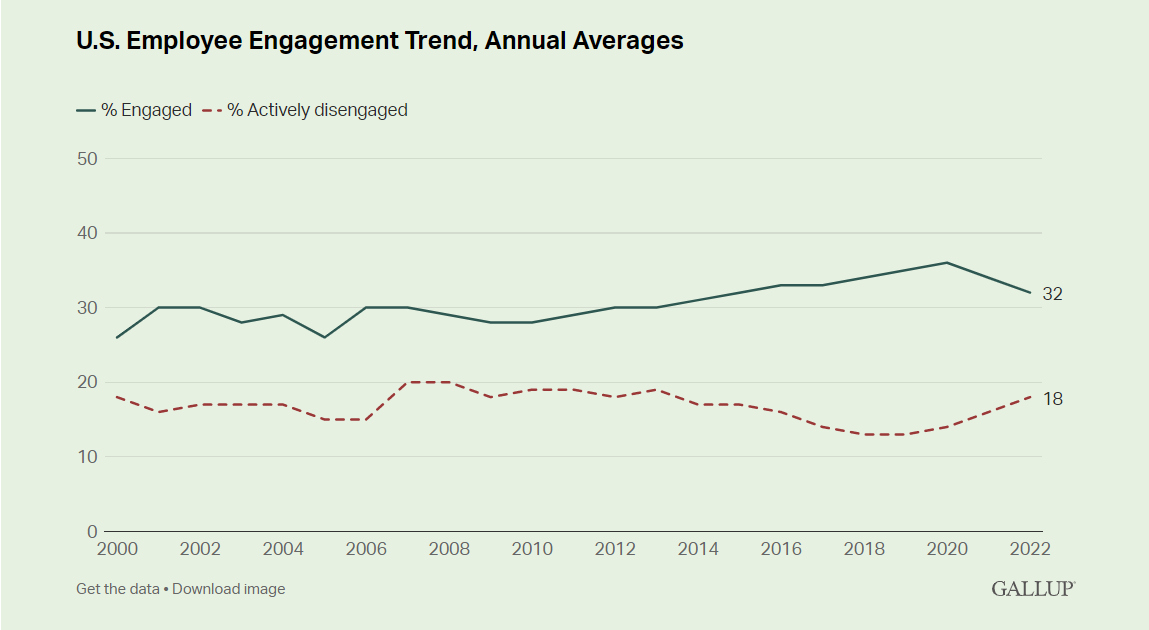 Gallup also reports that U.S. employee engagement is worsening. After steadily climbing for over a decade, employee engagement began declining in the second half of 2021— just as job resignations began rising. Managers were among those who experienced the greatest drop.

“The ratio of engaged to actively disengaged employees is now 1.8 to 1, the lowest in almost a decade,” reports Gallup.

Unfortunately, disengagement often leads to another more serious outcome of unsustainable work: burnout, which, according to global management consulting firm McKinsey, is rapidly rising. It estimates that one in four employees worldwide are experiencing burnout symptoms.

Unsustainable Work Is a Growing Problem

After the global chaos wreaked by the pandemic, it’s not surprising that employee disengagement and burnout numbers have spiked. Businesses have come and gone, and careers have been upended by school closures and other family demands. The overnight transition to remote working, alone, has turned work life as we know it on its head. Employee stress reached an all-time high worldwide in 2021 – for the second year in a row! (Notably, working women in the U.S. and Canada were found to be among the most stressed employees globally.)

But it’s important to note that the pandemic contributed to an already growing problem. “The Covid-19 pandemic has accelerated and exacerbated long-standing corporate challenges to employee health and well-being, and in particular employee mental health,” reports McKinsey.

Many employers are trying to be responsive. McKinsey says that employers are investing more in mental health and well-being than ever before. But their efforts are providing a poor return. Why? Because 70% of employees find they’re too busy or too stressed to access the services offered. Also, the offerings – such as yoga, meditation app subscriptions, and time management training – target symptoms, not root causes of employee distress, like lack of support, always being on call, and unreasonable workloads.

The growing sentiment regarding burnout and unsustainable work is that employers play a huge role in the problem. In short, widespread disengagement and burnout among workers reflects a problem with the organization, not workers. Therefore, unsustainable work environments call for employers to produce systemic solutions to these systemic problems.

With fears of economic recession looming, however, companies may feel pressure to tighten their belts. So, unsustainable work is unlikely to go away any time soon. But there are some measures individuals can take to help themselves. (That is, in addition to taking yoga and time management training!)

First, work on identifying how you are feeling says Jennifer Moss, workplace wellness expert. When you are aware of feeling exhausted, disengaged, or burned out, you can take breaks and consciously pull back from work. Set boundaries around answering emails and client expectations so that things don’t always seem so urgent.

Organizational psychologist and host of WorkLife podcast, Adam Grant, counsels in one of his episodes that a useful model for managing burnout and unsustainable work is: demand, control, and support. The goal, he says, is to reduce demands on you, try to gain greater control over the way you handle work demands, and ask for support so that you can cope better.

All this is easier said than done, of course.

But a good way to start is by communicating your concerns to your manager. Tell them what your needs are to do your job more effectively. Maybe the solution is as simple as a raise or just recognition for your work. Perhaps it’s more complicated. The point is, if you don’t communicate, your manager may not think to offer help.

Ultimately, if your efforts to manage unsustainable work are unsuccessful, it might be time to quit. That’s what Kayvon did. Stretched thin and feeling unsupported, he decided to move on. His career transition wasn’t easy, but asked whether it was worth it, he was unhesitating in his response.

“I have a quote on my fridge that I like to keep in mind. ‘If you aren’t happy with what you have, why are you afraid to lose it?’ That hits home with me,” said Kayvon. “When I started job searching, I had no idea where I was or where to go. Now I am aligned with what I want, and I know how to be taken seriously. It’s been totally worth it!”

Read next: Consulting Can Be a Bridge to a New Career