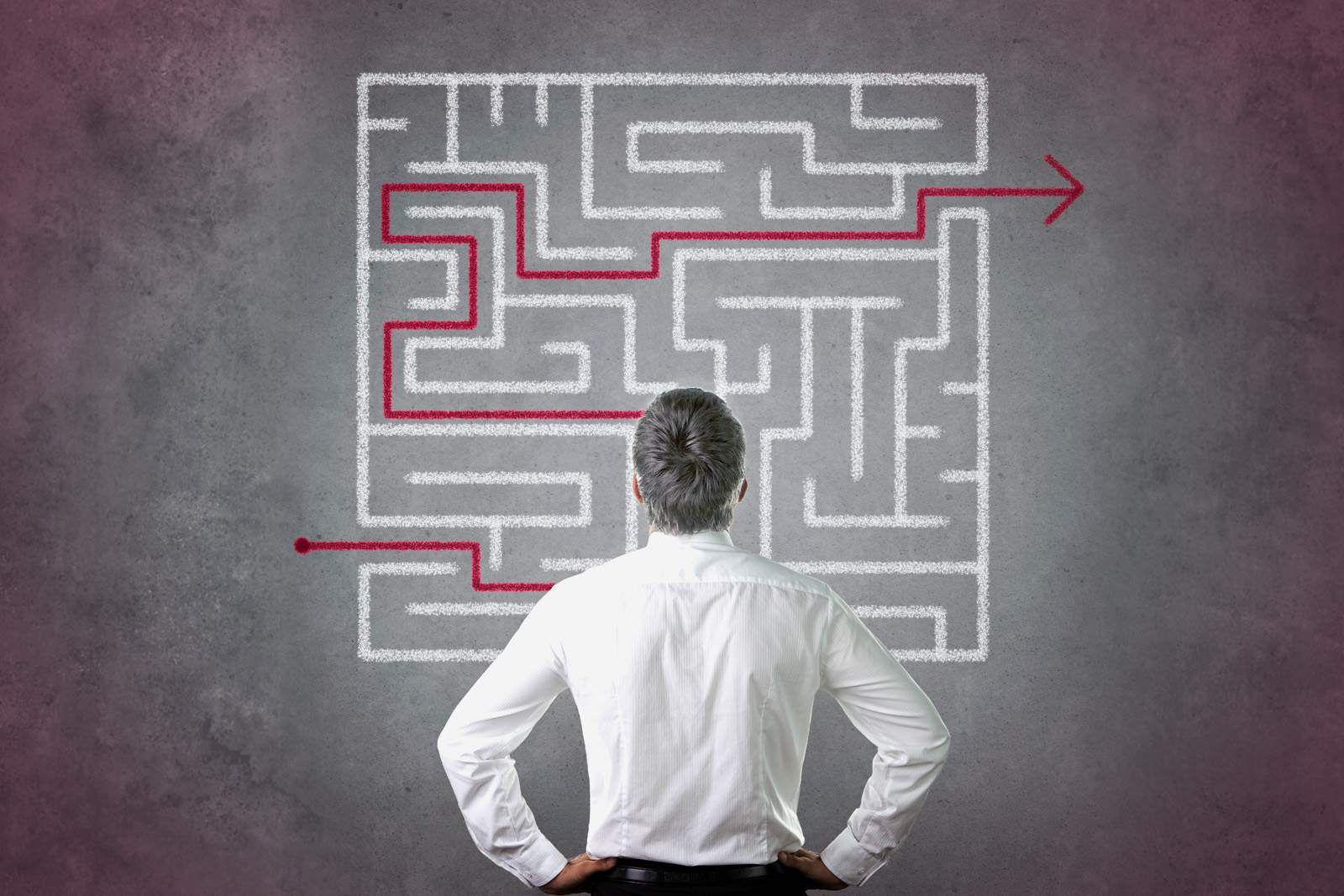 Ageism may not yet be on its heels, but greater awareness of our ability to counter it will make a big difference in how we experience our careers.

When Hugo Vereeken’s employer shut down the entire business unit where he had worked for 11 years as a global OEM segment manager, he was very motivated to find a new job, and he wasn’t the least bit worried about his prospects.

He had 38 years of professional experience ranging from engineering to management to global sales, including 24 years of direct liaising with customers. He had a master’s degree in electrical engineering, an MBA, a killer CV, international experience, and fluency in five languages.

Throughout 2020 he scoured online job boards, sending hundreds of applications. Despite casting the net widely across Europe, responses were scarce. And interviews were even more scarce.

He could have blamed Covid for his struggle. After all, everyone was reluctant to hire. But Hugo, age 62, saw something more pernicious at work. The silent rejection of people of a certain age.

“Age discrimination is against the law, but they never say you’re too old. They say, ‘Are you digital enough? Will you fit in with our dynamic team? Are you aware of the latest technological developments?’ These are all hidden reasons for rejections on the basis of age,” said Hugo. “I heard 25 different ways to say, “Hugo, you’re too old! Go and retire!’”

The Age-old Struggle Against Ageism

Unfortunately, Hugo’s experience is all too common for people, no matter where they live. Ageism – prejudice or discrimination against employees or job applicants on the grounds of one’s age – is an age-old problem.

An international survey conducted last year found that hiring managers across the globe have a strong perception bias against job candidates aged 45+. As a result, older job seekers are unemployed for much longer than the median. For them, age is one of the greatest barriers to finding a job.

Fully employed workers aren’t safe from discrimination, either. A study by ProPublica and the Urban Institute shows that more than half of older U.S. workers are “pushed out of longtime jobs before they choose to retire, suffering financial damage that is often irreversible.”

The irony of this pervasive problem is that an increasing percentage of older workers are delaying their walk into the sunset. Retirement ages in industrialized countries have been rising over the last three decades. And in the U.S., where about one-third of the workforce is over 50, the percentage of people in the oldest segments of the labor force (ages 55-64, 65-74, and 75+) that are working or looking for work is expected to increase through 2030.

There are several possible reasons for this: Decreased financial security stemming from unanticipated events, a rising cost of living. Rising levels of healthy lifestyles that enable people to work beyond traditional retirement age. And a growing interest among people to find meaning and purpose in second (and third?) careers.

Whatever the reasons, Baby Boomers and Generation X’ers won’t go gentle into that good night.

Could a greater number of older people working and looking for work mean that perpetrators of ageism will find it harder to discriminate against them? One can hope! Either way, it is a surprising and encouraging development regarding age and work. And it’s not the only one.

A Bigger Slice of the Pie

Another eye-opening aspect of age and work is the growing share of older workers in the total civilian labor force.

Data from the Bureau of Labor Statistics reveals an interesting picture of the age makeup of the U.S. labor force and how it is changing. From 1970 until the end of the 20th century, workers 55 and older made up the smallest segment of the labor force. In the mid 1990s, though, older workers began staying in the work force in greater numbers. Meanwhile, participation of the youngest workers (ages 16 to 24) began decreasing in 1978, dropping below the level of the oldest workers in 2003.

Today, people aged 55 and over comprise a larger share of the U.S. civilian labor force than they have in over 50 years. And that number is forecast to grow through 2030. 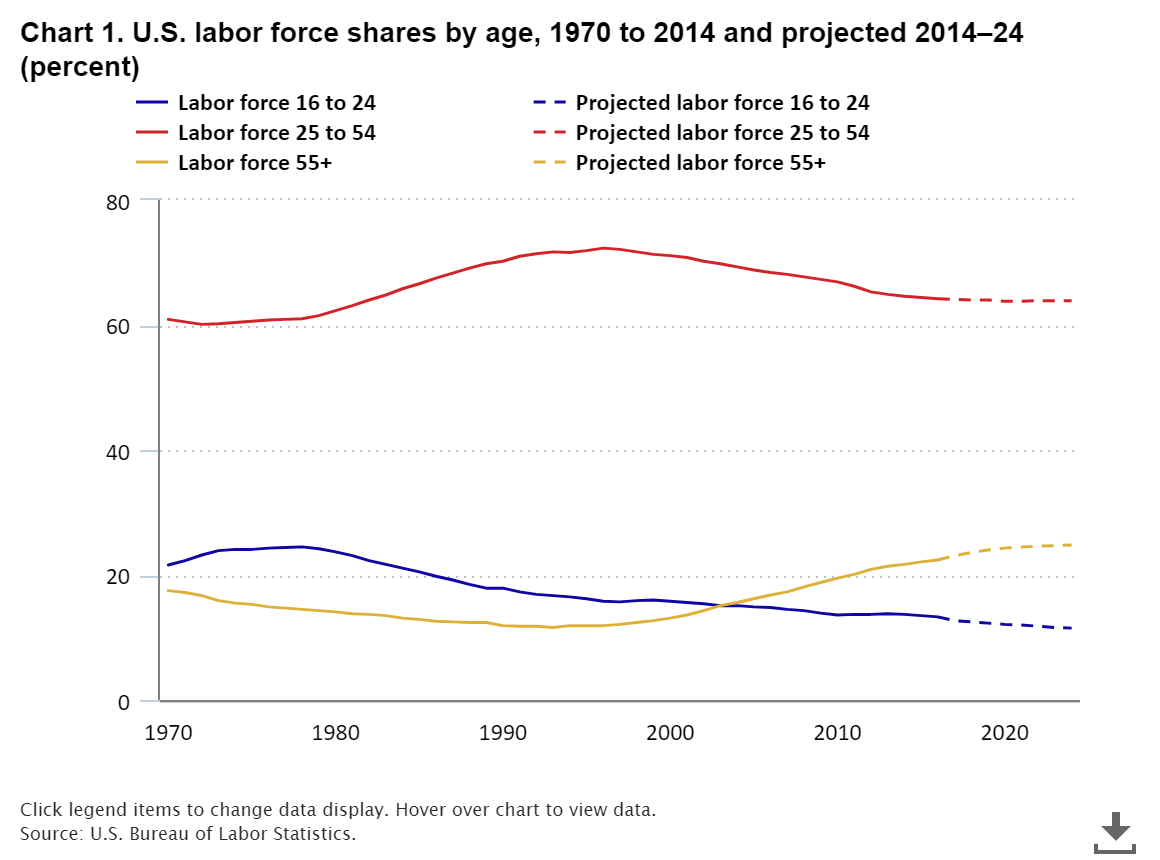 These demographic developments coincide with two legislative developments that are long overdue. Last June, the U.S. House of Representatives passed a bill – the Protecting Older Workers Against Discrimination Act (POWADA). If passed in the Senate, it would restore protections to older workers that were lost in a 2009 U.S. Supreme Court decision and make it easier for people to win legal claims of age discrimination.

In November, the House also passed a bill to protect older job seekers from age discrimination in the hiring process. The Protect Older Job Applicants Act (POJA) would amend the Age Discrimination in Employment Act of 1967 and guarantee protections for job applicants, which court rulings weakened in recent years.

Many believe that few victims of age discrimination ever report it, much less file suit against it. Because the burden of proof is too high. But that would change if these two pieces of legislation clear the Senate and are signed into law. With more Americans remaining in the workforce longer, the new legislation would come at a good time.

The passage of POWADA and POJA is by no means a surety. Similar legislation has been introduced in Congress before and failed.  But could social and economic events shift the political winds this time?

According to AARP, an American interest group focusing on issues affecting those over the age of 50, 78% of older adult workers surveyed in late 2020 said that they’ve seen or have experienced age discrimination in the workplace. That rate is the highest level since AARP began tracking the question in 2003.

Does this statistic indicate a spike in the incidence of age discrimination? Not likely. AARP views the increased rate, rather, as a rise in the perception of age discrimination. In other words, people have become more aware of the problem. Not surprising, perhaps, in the wake of the #MeToo and #BlackLivesMatter movements. Which heightened awareness of the prevalence of sexual harassment and racism.

AARP also reports that 96% of older workers agree that laws to combat age discrimination should be stronger. So it will be interesting to see whether this newly enlightened population of older workers will inspire government action to counter the problem of ageism.

What Can You Do to Counter Ageism?

tackle those misperceptions head on.

It’s always fun to point to research that turns such stereotypes upside down. One such example is a survey of 3,800 workers and 1,400 employers in Brazil, India, Italy, Singapore, Spain, the U.K., and the U.S. during the spring of 2021. Employers reported that, once hired, 87% of their workers aged 45 and older performed just as well or better than their younger workers, and 90% of employers said that those midcareer workers showed the potential to stay with the company long-term.

At the individual level, focus on demonstrating that you are different from the stereotype of an older worker.

Omit dates on your resume that betray your age. We are 22 years into the 21st century. At all costs, avoid listing or dating employment or academic credentials from the 1980s or 1990s. Doing so risks triggering applicant tracking software (ATS) systems. If your resume does somehow get past the ATS, human screeners who read the dates will move on to the next candidate.