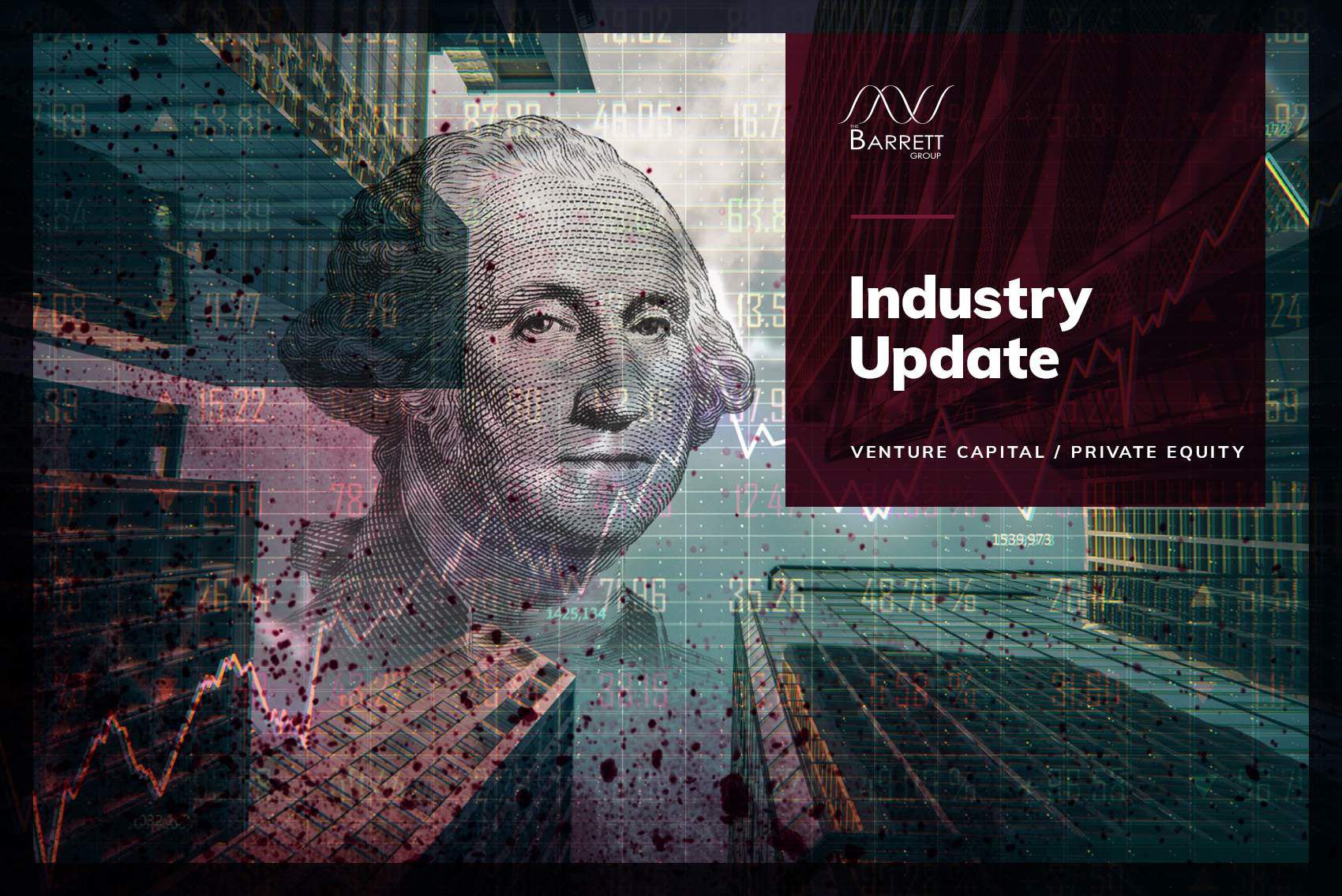 Introduction: Dry Powder and a few Questions about Private Equity and Venture Capital

The last two years have been extremely strong in terms of fundraising for PE and VC firms. One measure had them sitting on as much as $1.4 trillion in fresh capital (dry powder) as of mid-year 2022 (See source.), funds they will need to deploy in the near term, either by take-privates of public companies, or investment into existing, typically private, companies.

Given the economic headwinds in Q4 of 2022, the question is, of course, where is the growth potential and therefore where to invest?

As we have pointed out elsewhere, some companies feel so bullish about the longer term that they see this slowdown as an opportunity to invest and perhaps retool against their future strategy.  Sunita Patel of Silicon Valley Bank says, for example, “A downturn can offer opportunities to build an even stronger team, focus on market needs and potentially create whole new categories. The 2007-2009 global downturn produced Airbnb and Uber.” (See source.).

JP Morgan seems to be pursuing this logic by announcing its plans to hire 2,000 software engineers as it executes a strategic pivot toward the digitization of business processes and other strategic initiatives.  (See source.)

Other firms will doubtlessly also shift their strategy, rebalancing their investment portfolios away from inflation- or interest-rate-sensitive categories to asset classes likely to appreciate over time, e.g., real estate.

Much of the recent reporting on this sector focuses on a reduction in fundraising and on a decline in valuations.  Both of these trends are very important, of course, for the PE/VC funds and their investors, but our focus is on executive opportunities, particularly at the portfolio company level.   In this context, there is a tremendous opportunity as we highlight in our recent blog Private Money In Your Future – Who’s Who and What’s What.

Sectors that are likely to benefit from an adverse economic climate include the banking sector, certain real estate segments, environmental services, alternative energy, and electric vehicles and infrastructure to name but a few.  In that sense, the changes in the PE/VC companies we will see in this Update are informative as they reflect changes in the underlying strategy and therefore the sectors and portfolio companies these funds are investing in that will ultimately yield executive opportunity.

The data in this Update is naturally historical, so relying on it to make decisions about the future is akin to driving a car while looking in the rearview mirror.  We always encourage executives to perform appropriate due diligence during any prospective career change.  That is one reason that our clients have access to enormous data resources to make the most accurate decisions possible as they screen markets, select target companies, and then prepare for interviews.

Last year we looked at a smaller set of titles that we have now augmented to reflect the broader PE/VC executive landscape (see Editor’s Note).  This expanded set of executives, combined with the strong growth in this sector mean that the entire population has grown by about 3% p.a. to about 313,000 with approximately 16,500 having changed jobs in the last year. Regionally, the EU/UK/Middle East (ME) cohort came in at circa 92,000 industry executives, 4,779 having changed jobs.  In the US, the population grew similarly to about 221,000 with some 11,800 changing jobs in the last year.

This total population is largely male, ranging between 77% masculine (US) to 81% (EU/UK/ME) and the average tenure in these positions falls between 3.9 (EU/UK/ME) and 4.9 years (US). 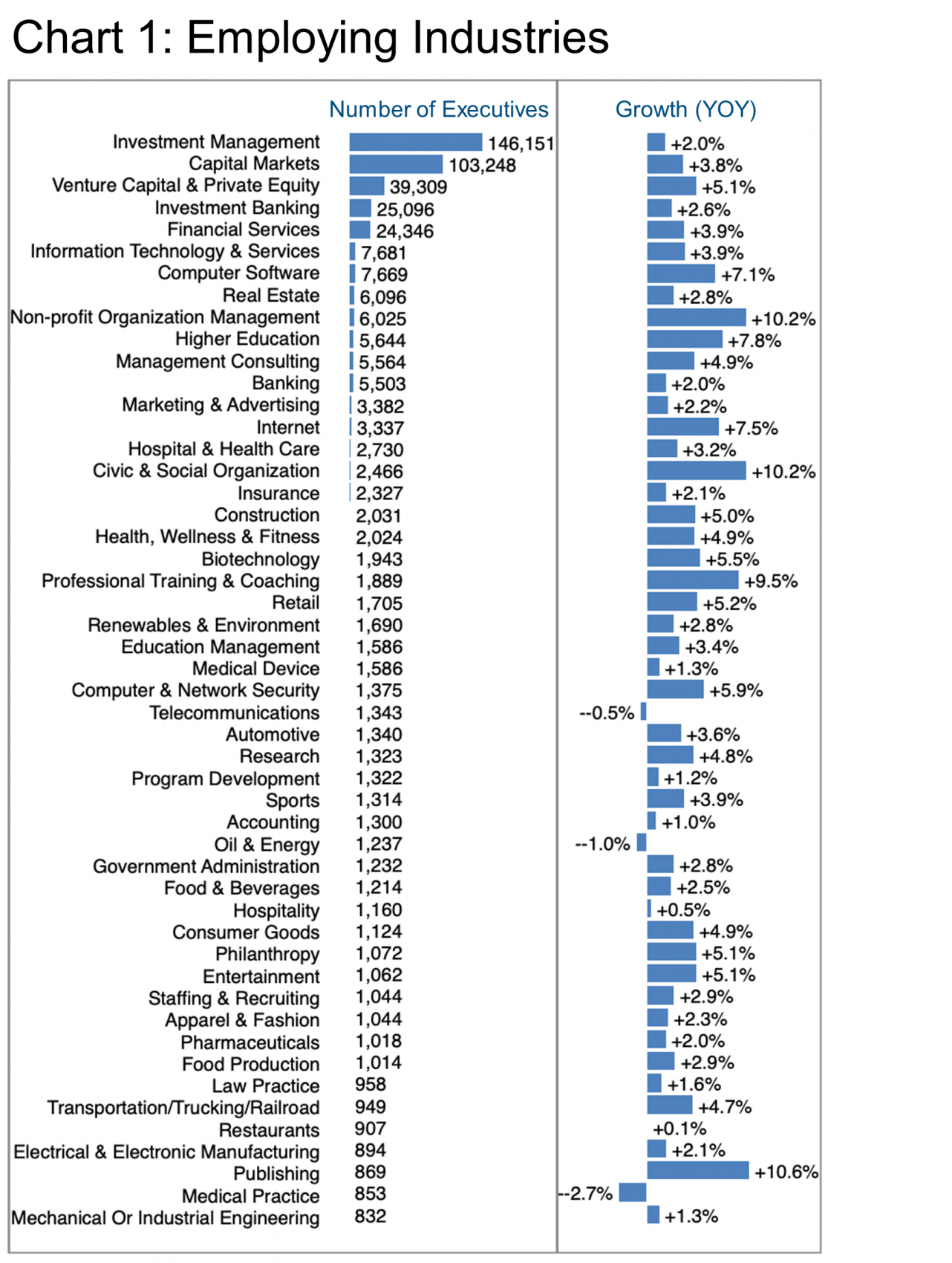 Chart 1 explores the specific industries in which executives who claim affiliation with the PE/VC fieldwork and it is no great surprise that the top five comprise about 77% of the first fifty total.  They also have some of the lower to mid-level growth rates (2%-5.1%) in the list while Non-profit Organization Management and Civic and Social Organizations both come in above 10% growth p.a.—and also sport a higher than average female executive share between 28-31%.  Separately, LinkedIn lists the following industries as all exhibiting “very high hiring demand”: 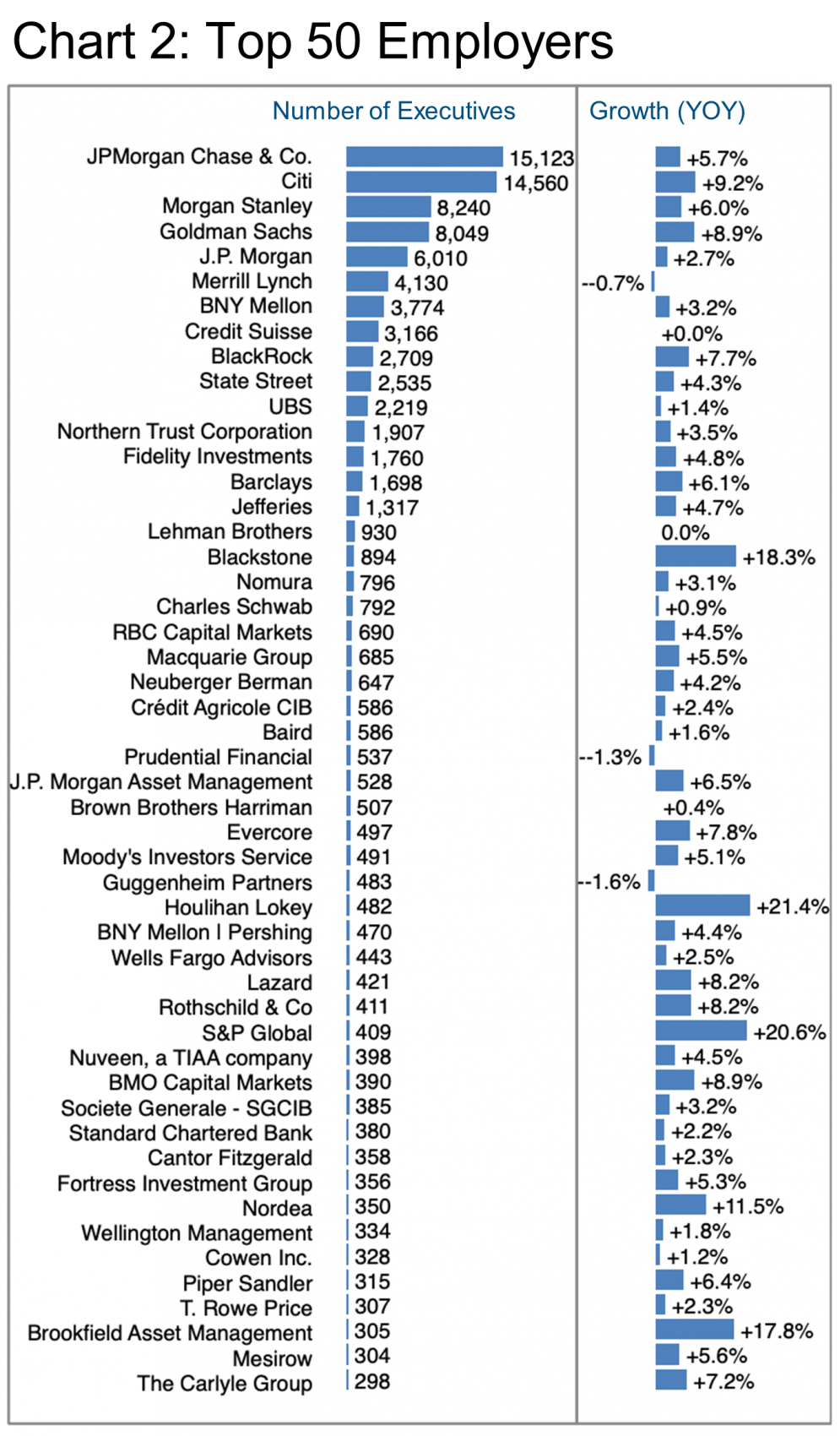 Chart 2 begins to explore the companies that employ these executives whereby, the top six in this case cover about 55% of the first fifty.

Of course, some of these leaders are now also leading the way in staff reductions as they shift their portfolios.

For example, Citi has decided to trim its mortgage lending team:

“The bank funded $16 billion in residential mortgages from January to June, a decrease of 5.9% compared to the same period in 2021.  Like Citi, other depositary banks are reducing their mortgage staffing levels. Wells Fargo, for example, will lay off 75 employees in its home lending division in Iowa by the end of October,  according to Worker Adjustment and Retraining Notification (WARN) notices submitted to the Iowa Workforce Development. The bank eliminated 197 mortgage jobs in Iowa across earlier layoffs. JPMorgan Chase and U.S. Bank have also shed an undisclosed number of jobs in their mortgage divisions.” (See source.)

Painful as these reductions may be for those directly affected, they underline the opportunity inherent in such changes.  As a result, Citi hired new talent to execute these changes (Liz Bryant and Darin Lugat, both formerly of Wells Fargo).

Goldman Sachs has also announced adjustments to its staff as the demand for specific segments of its business has changed, for example, IPOs and junk debt issuance. (See source.) For more perspective see The Upside of Downsizing.

On the other hand, Blackstone has ranked number one or two in the capital-raising rankings in the past year and shows accordingly high growth in its executive ranks (+18.3%), although its third quarter 2022 profits were well off, so far it seems to be avoiding staff reductions. (See source.)

To learn more about Who’s Who in the industry, see our recent article on Private Money in Your Future – Who’s Who and What’s What. 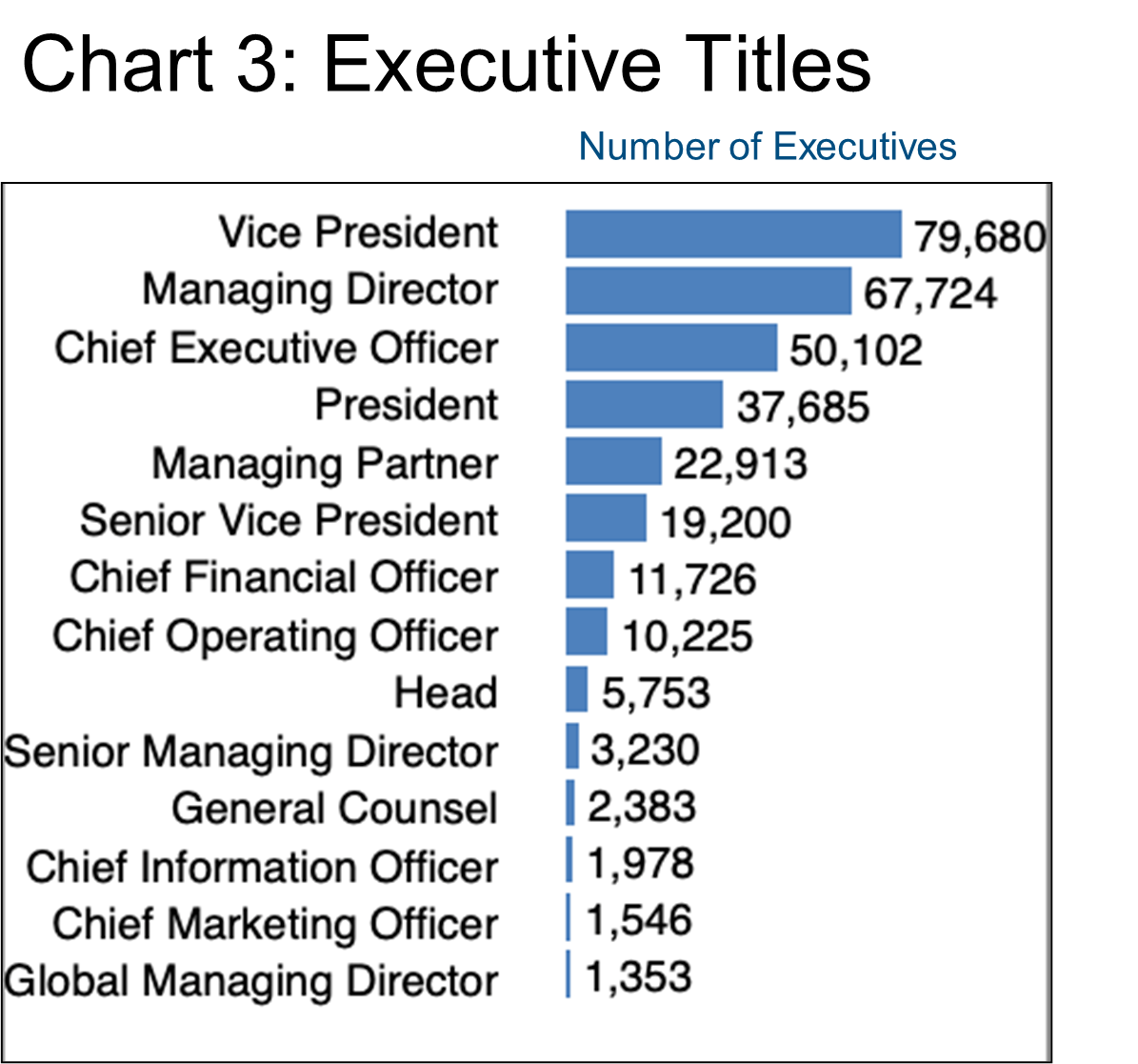 Title-wise (Chart 3), the industry is not as top-heavy as some, in this case with far more Vice Presidents and Managing Directors than CEOs — a testament to the relatively concentrated state of the industry at this juncture. 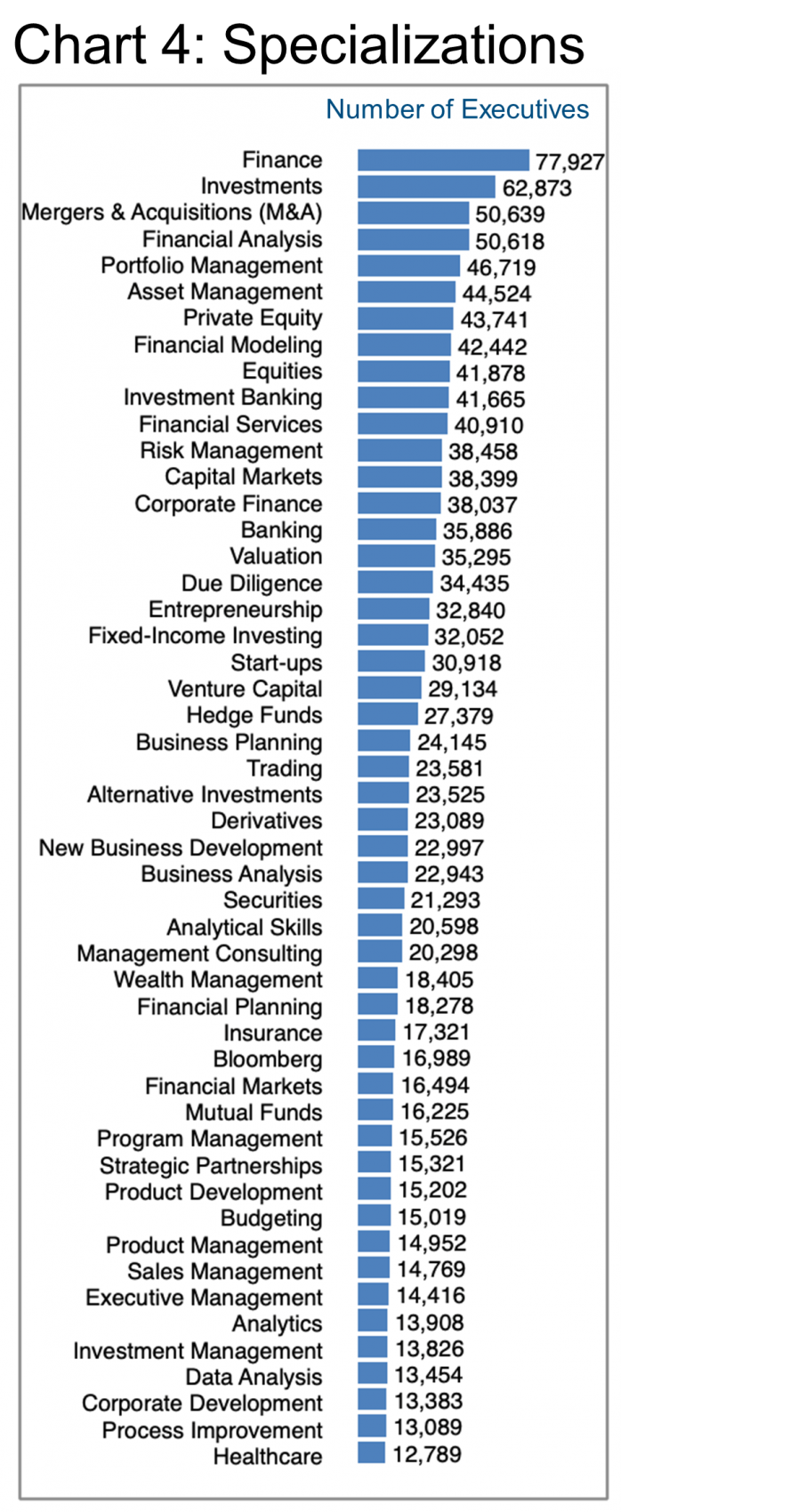 Chart 4 explores the specializations cited by LinkedIn member executives indicating their main sphere(s) of activity.  Of course, each executive probably does have more than one string to his/her bow, so please bear that in mind when looking at the totals.

Two aspects stand out immediately in this data; the first is that Startups have plunged from number 2 in 2021 to rank 20.  Part of this is undoubtedly the enlarging of our executive pool by including more titles this year (see Editors’ Note).  However, start-ups also seem to be somewhat out of favor at the moment as being generally too risky.  One source cites a 34% drop in Q3 2022 funding for VCs due to this phenomenon  (See source). Smart money may instead be chasing established businesses that want to grow and scale.

Nevertheless, there are undoubtedly start-ups to watch in the coming months that capitalize on cost savings, consumer trends, and market opportunities. Here is Forbes’ recent list, for example: Promising start-ups in 2022.

Another key observation based on Chart 4 is the relative transferability of some of these skills versus other industry segments.  As we highlighted in our transferability analysis (Read more), generic skills such as Business Development or Sales Management are most universally transferable followed perhaps by Finance, Budgeting, Product Development, and Business Planning.  As you will see from Chart 4, some of these are present, but only Finance ranks high in the list.  In other words, there is a relatively high level of specialization in this industry vertical.

The industry is notorious for hiring in a very regiment-ed way from primarily three sources: undergrads as analysts, banking analysts from banks, and hiring of industry insiders from other PE firms. (See source.)

Let us examine one example.  We mentioned Blackstone’s relatively rapid expansion early in this Update.  Where did those associates come from?

The list goes on to name Deloitte, J.P. Morgan, and Credit Suisse, but perhaps that suffices to make the point. Note that the moves listed above are not only at the executive level, however, our research can also identify individual job changers in case that knowledge serves our clients’ social capital strategies.

Most of the top 50 locations for PE/VC executives (Chart 5) seem to have grown faster than the industry average.  This suggests that some locations must also be shrinking or at least growing much more slowly (Chart 6). 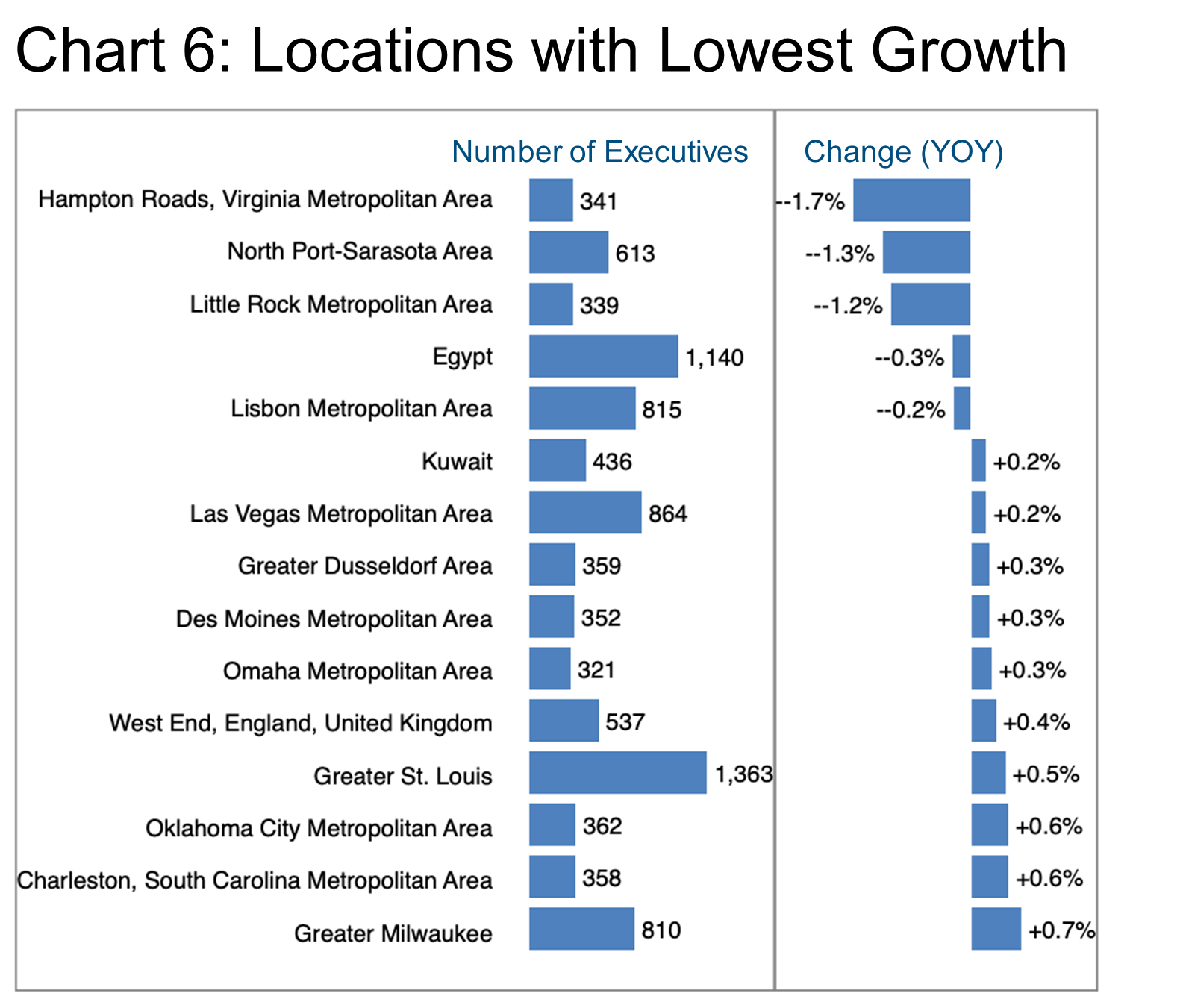 Among the top three locations, Citi, JP Morgan, Goldman Sachs, and Morgan Stanley dominate the employed executives list as the largest employers.  As of San Francisco, BlackRock and Charles Schwab join the top ranks.  Northern Trust shows up in Chicago, and State Street, Fidelity, and BNY Mellon come in as of Boston.  LinkedIn states that the hiring demand is ‘very high’ in these top locations, except for Los Angeles which ranks as ‘moderate’.

Outside the US and the UK, top employers include Credit Agricole, Societe Generale, and Rothschild & Co. in Paris, Citi, Standard Chartered Bank, and Credit Suisse in the UAE, and in Ireland (profiled due to its high growth rate), Citi, State Street, and Citco Group. Naturally many other locations deserve further mention but we have limited space in this Update.

Our clients have access to our complete research capabilities that typically evolve in an initial screening stage, then a deeper dive into a smaller list of targeted companies, followed by in-depth profiling of specific companies and even hiring executives ahead of critical interviews.

Is LinkedIn truly representative? Here’s a little data: LinkedIn has approximately 850 million users (See source). It is by far the largest and most robust business database in the world, now in its 19th year. LinkedIn defines the year-over-year change (YOY Change) as the change in the number of professionals divided by the count as of last year. “Attrition” is defined as the departures in the last 12 months divided by the average headcount over the last year.