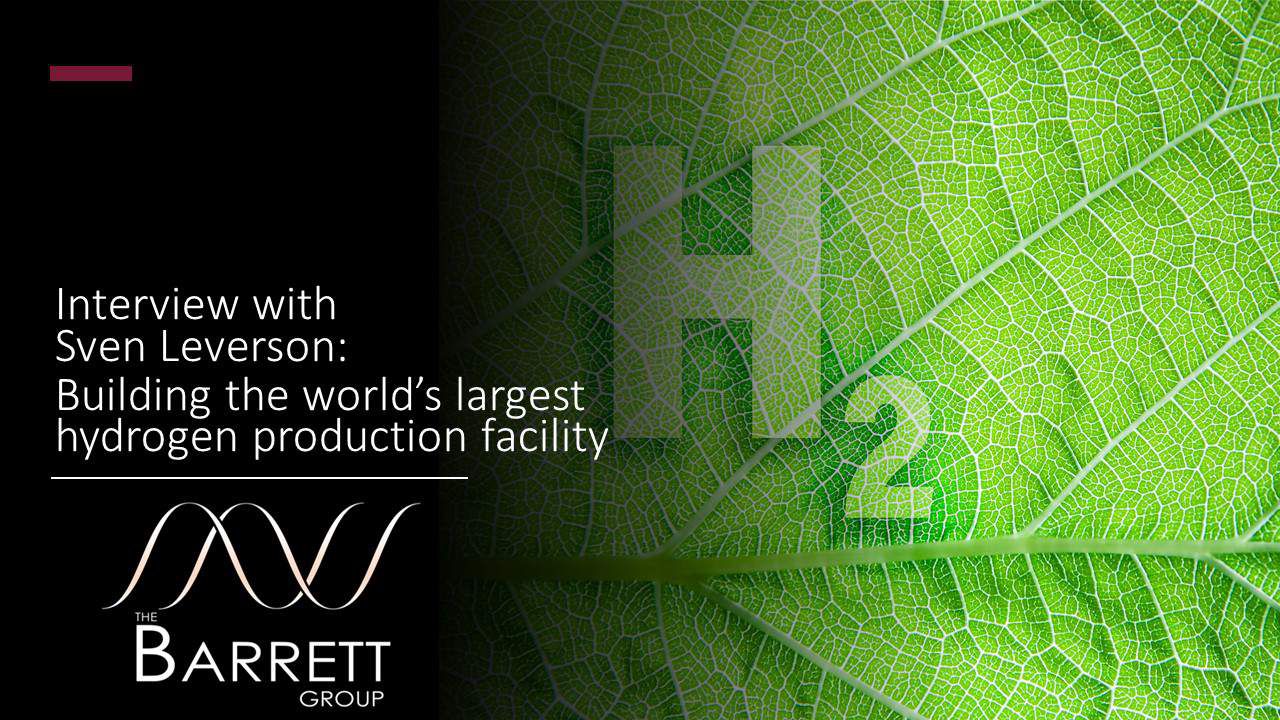 Peter Irish: Okay, welcome to this edition of the front line. I’m Peter Irish, the CEO of The Barrett Group, and it’s my great pleasure today to talk with Sven Leverson about the energy industry. Sven, welcome. Please introduce yourself.

Sven Leverson: From an energy and power perspective, I have been involved with hydro, coal, combined and simple cycle solar, wind and nuclear projects. I’ve been in the industry about 20 years. I like to involve others with a win-win approach for dealing with management as well as the project team and the stakeholders.

Peter Irish: Now we’ve been looking of course at the overall energy industry, and we’ve published an update on how that pool of executives is evolving and one of the obvious pieces is the conversion over time from fossil fuels towards alternative, green energy sources. But let’s start with where we are today. How do you see today’s energy landscape?

Sven Leverson: I see the energy industry moving towards more green hydrogen and production and where possible storage in underground salt caverns and ultimately powering combined cycle power plants with a mixture of hydrogen and natural gas and with the anticipation of 100% hydrogen in the near future.

Peter Irish: Well, hydrogen obviously has some great advantages burning cleanly and being abundant. It’s just a little volatile as far as storage and transmission are concerned.

Sven Leverson: Right. Exactly. So, storage in salt caverns underground. Salt is plastic in nature. So, the storage of compressed hydrogen in salt caverns is a very unique and able solution for storage. It’s essentially underground battery of sorts.

Peter Irish: This is storage of the actual liquefied gas, I guess. Is that what you’re talking about.

Peter Irish: Oh, all right. So, it’s not. So, let’s talk about this landscape. I’ve seen lots of predictions that alternative power from green energy sources might eclipse petroleum, for example, by 2037 or thereabouts, there are many different predictions. How do you see that evolving over time? What’s the role of alternative, green energy? How long is it going to take? Which technologies are likely to be at the top of the heap in the next couple of decades?

Sven Leverson: I see the landscape moving towards renewed green hydrogen in about the 2030-2035 timeframe with many electrolyzer facilities popping up over this country and globally.

Sven Leverson: Electrolyzers – it’s a combination of electric current and splitting the hydrogen from the oxygen molecules.

Peter Irish: Right, right. Like those experiments we had back in high school chemistry.

Sven Leverson: Exactly. And it’s actually a unique process with 100 plus years of background history involved.

Peter Irish: Obviously there’s energy input and energy output. Do you think they’ve solved that equation so they can get more energy out of it than they’re putting in or how do you handle that?

Sven Leverson: Initially the combined cycle plants will burn 30% mixture of hydrogen and 70% natural gas and eventually 100% hydrogen, multiple salt caverns with hydrogen and facilities popping up all over the countryside.

Peter Irish: Well, I can understand the, that helps with the transmission because if you have a local facility, don’t need to transmit it very far, etcetera. But how common are salt caverns?

Sven Leverson: They’re very common. The first salt caverns and the United States were developed in 1970s and there’s copious amounts of salt caverns in the Gulf states. And five salt caverns have been developed in the western energy hub, which we call “Delta”.

Peter Irish: Now, how about your new role in this in this company that I guess is commercializing the whole idea of storage and salt caverns. Can you tell us a little bit about your role?

Sven Leverson: Sure, I’m a senior project in construction manager for the following phases: constructing a 220-megawatt electroylyzer facility. These electrolyzers will be powered by renewable energy and developing via solution-mining two 4.5-million-barrel salt caverns initially. And constructing two 150 acres plus brine ponds to store the brine solution from the salt caverns. And engineering, procuring and constructing a 140-megawatt combined-cycle power plant.

Peter Irish: That’s a fairly significant piece of work. How long is all of that likely to take?

Sven Leverson: It should take about 3-5 years.

Peter Irish: So you’ll have something to do.

Sven Leverson: Right. So these salt caverns are as tall as the Empire State building.

Peter Irish: Wow! Now tell me, can you reveal where this is, at least the state, or is it a secret?

Sven Leverson: It’s Delta, Utah. It’s about 15 miles north of Delta, Utah. And the coal plant that exists there today is being retired. And this is public information. So, and we are going to build a 840 megawatt power plant, combined cycle power plant.

Peter Irish: Now, this is an unusual facility. It’s probably the first of its kind. Is that right?

Sven Leverson: It is! It’s the world’s largest electrolyzer facility that we are going to be building.

Peter Irish: Excellent. Well, good luck with all of that. That sounds like a huge piece of work. You seem very calm in the face of this engagement, but I’m sure your feet are moving very rapidly under the surface, right?

Peter Irish: So, if you don’t mind my asking, how did The Barrett Group help you to locate this job? And what was your experience?

Sven Leverson: Coming in through the back door is the recipe for success. From the Clarity Program processes through the negotiations and landing the job. The processes were easy to understand and I’m very thankful for The Barrett Group and their stellar processes.

Peter Irish: Well, thank you very much and I think you’re the proof of the pudding: it worked for you, I guess it can work with other people. So, congratulations. I’ve also been through it myself. So, I know what that’s like. So, what advice would you have for other executives who are considering either joining or leaving the green energy industry? There’s a lot of movement in that space. What wisdom would you have for them?

Sven Leverson: The power energy industry treated me very well over the past 20 years. I was a consultant for the energy and power industry for 20 years and I decided to make a leap to more permanent role so I can see myself working in the energy industry until I probably die.

Peter Irish: Well, many people fear change I think in many industries and many cultures, but my sense is that typically although there are, you know, big ramifications of change, usually technology creates more jobs elsewhere in the ecosystem. What’s your sense of how the change in power generation and transmission is going to affect overall employment or executive employment? What do you think?

Peter Irish: So, thank you very much, Sven, for all the information you’ve shared so far. I wonder if you would be kind enough to share an anecdote from your own history that might provide a little encouragement. Maybe some moral support for other executives who are facing similar career challenges at the moment.

Sven Leverson: I’ve had so much fun in the power and energy industry and the time sure has flown by. I would engage The Barrett Group into my mix of tools for achieving success in a career, one tends to think that they know it all. But on the contrary. I learned so much through The Barrett Group processes. My father always told me to keep my chin up and plow through. Oh, if you haven’t tried The Barrett Group, you should step out of your comfort zone and take the leap of faith. It’s money well spent.

Peter Irish: Well, thank you very much for that. I appreciate the support and when should we check back with you in a year or so to find out how you’re progressing?

Peter Irish: Well, we wish you great luck and success in your project and by the way, you’re going to influence all of our futures. I hope in a positive direction. Thank you very much for your time today, Sven, and good luck in your new role.